The 31st March is Trans Day of Visibility, ‘TDoV’ for those of us in the community, and you may wonder, what is this day all about? – To which the answer is ‘exactly what it says’ – it is about Transgender people being visible, living their lives. It started as a response to the fact that during a year of observances, trans people recognised (and still do) those trans people lost to violent death and suicide every year (November 20th) but we did not have a day celebrating our humanity and the contributions we make to society.

For me personally, TDoV is a particularly special day, as it marks the anniversary of when I ‘socially transitioned’ – which is to say, that I stopped presenting myself to the world in the gender I was incorrectly assigned at birth and made some practical steps to make the change. Interestingly, as a Project Professional I had a Gantt Chart (that’s a graphical depiction of a plan for the uninitiated) – which had a much longer timeline envisaged – there is a lot to do when you transition; medical support, emotional support, finding your ‘style’ – and I had all of these on my ‘critical path’ – things I felt I absolutely MUST have done before being comfortable to be myself publicly every day, and not just temporarily for an evening or day out.

Then something happened.  On the 23rd March 2020 I found myself being the last person in the office at Corby – everyone else already having started to work from home for a ‘short period’. It was surreal, the business knew I was trans by this time of course, and in my ‘coming out’ message I had referenced that I had a ‘lot to do’ before people would see the real me every day; but in honesty, the 5 months of living a double life was getting really tough and when on the 24th March I came home knowing that the office was now closed I started to think about what survival and visibility really meant now. 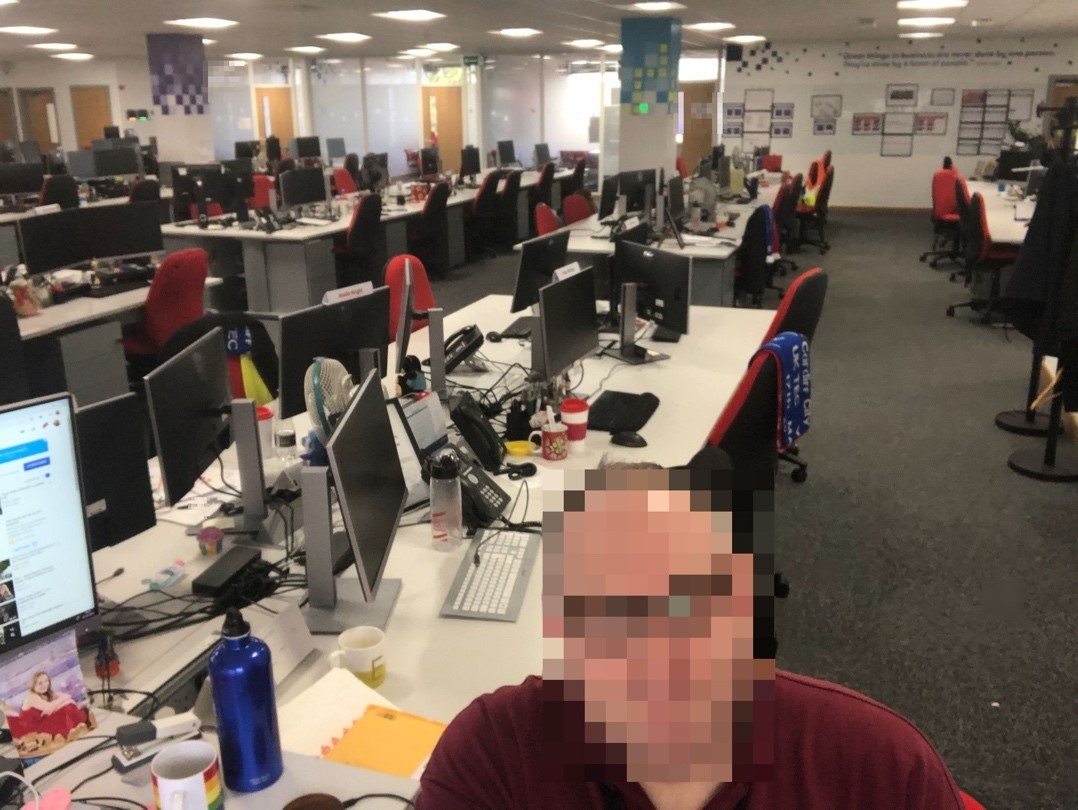 23rd March 2020 – the day the world changed – face redacted for my own mental health!

So working from home started, and TDoV 2020 was fast approaching – how can you be visible and demonstrating the value of trans lives being lived when you aren’t interacting with people? – On the 28th March, I sent a message to my then manager asking to initiate my name change on all of our corporate systems (I had already legally changed my name by deed poll) and that I wanted to change my corporate avatar – which appeared on teams calls (the camera was a definite ‘no-no’ in my mind then) for the day of visibility. To make my transition real for those I worked with, to socialise the real me, before we got back in the office together. At that point I thought I would change things back after 1st April, until I got into the office.

The reply was that the systems could be changed – but that it was a one way street, and I ‘had to be sure’. I was sure. In fact, never so sure of anything in my life.

Some things I just did – we can all change our avatar ourselves, and I shared a (then) recent selfie taken on one of my last nights out in a restaurant, the name change followed a couple of days later. 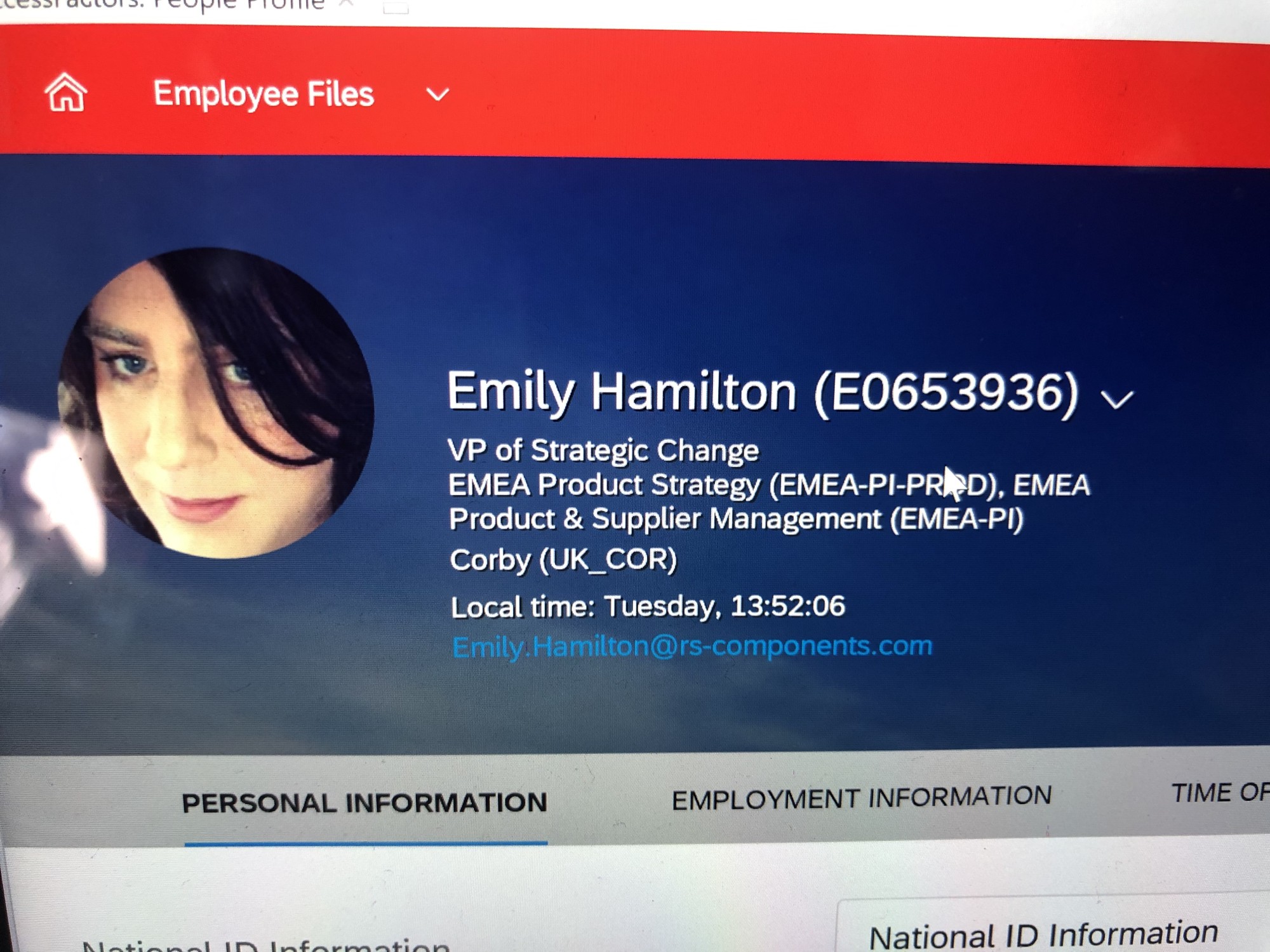 The first ‘official’ recognition of me at work

In terms of process, RS has been brilliant, our IT team managed the changes quickly and sensitively – my team, who had been on the journey with me for a number of months switched seamlessly to using my name and pronouns, and by and large so did the wider business. Lockdown was hard though, as part of transitioning you build a support network of trans people, as no matter how understanding or how strong the ally only trans people can really understand what it is like to struggle with gender dysphoria and the irrational and visceral hatred which is more prevalent day by day – and lockdown pulled the plug on that. I certainly found April very difficult indeed and was grateful to the many people in the business who recognised the difficulties that people in the LGBTQ+ community face in isolation for reaching out to me and supporting my mental health at that time.

One of those people was Alison Hutchings, a friend in our innovation team and fellow 3d Printing enthusiast who had been setting up a response to the national shortage of PPE which plagued the start of the pandemic.  RS set up a 3d Print farm in Corby to produce visor shield frames and Alison, knowing that I needed to get out of the house asked if I would like to ‘do a few shifts’ on the farm at our Corby site – I think I said ‘yes’ before she finished the sentence.

Agreeing to take over work on the 3d print farm represented the biggest change in my visibility at work, as it entailed being me in Corby, and changing my ID etc.

I won’t lie, this was a massive moment for me in transition; and it came much sooner than I had planned. That first day was incredibly nerve wracking, having received a message from security on the Sunday saying that I should report to our back door for a new ID pass, I arrived at the office at 0800, on a sunny day, and recognising the importance of the day stopped at the front of the building for a selfie. 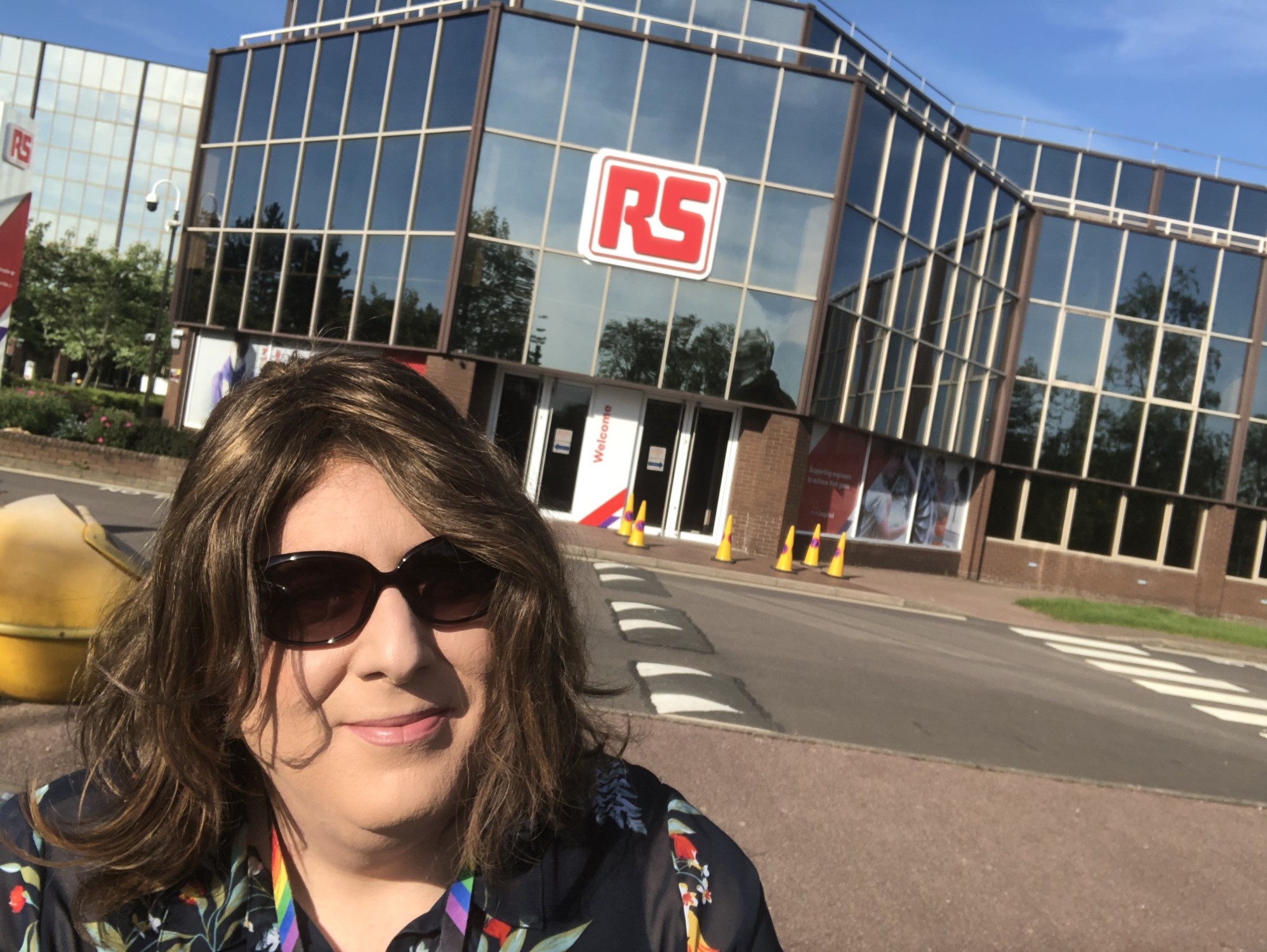 My first day at work, 2 years after I started the job

The walk from the front door to the security station was like a marathon, I arrived with nerves I haven’t felt in a long time, wondering how security would be with me (my only real interactions previously had been from pressing the red button of doom, and submitting to a search) – but I needn’t have worried.  They were ready. ‘Good morning Emily, you’re here for a new ID today?’ was the greeting – and we got on with the process - just as any colleague would. 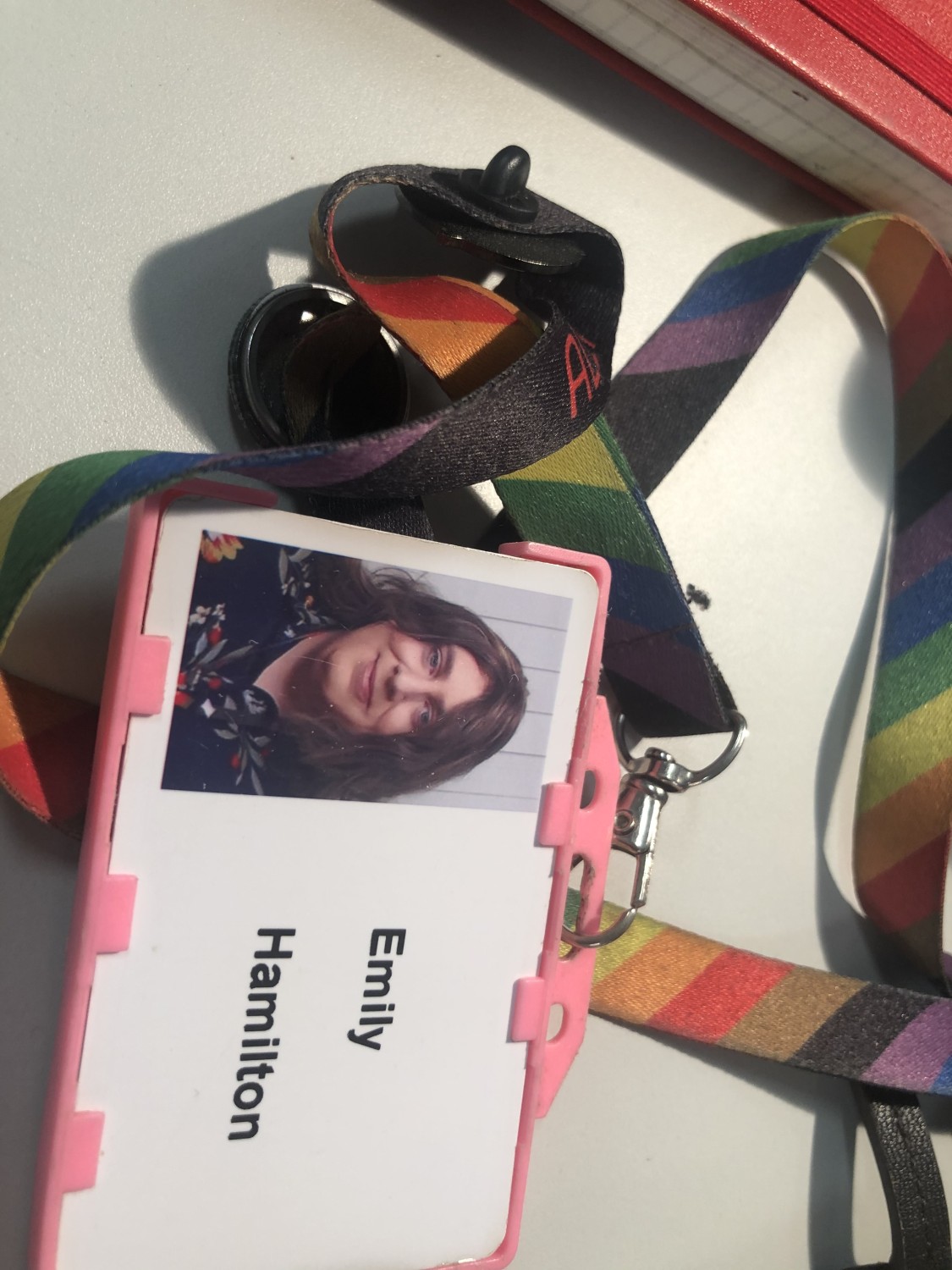 The first ‘official’ ID I ever had

In a lot of ways, seeing my name and picture on my work ID card was the most ‘real’ thing I’d yet seen recognising the real me – and it meant that there was truly no going back [not that I wanted to]. Starting teams calls as me, and finding that I had unlocked a whole load of mental capacity by just not hiding who I was was a real revelation, and one I was not ready for. Despite all the grimness of a year of relative isolation, I have driven forward a multi-million pound programme; delivered a keynote at my first pride (at least I sort of kept one of my 2020 new year’s resolutions!) 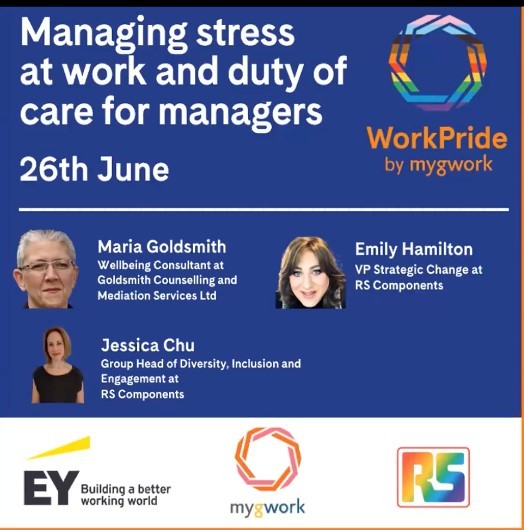 Keynoting at my first ever pride

I took part in a panel event discussing trans experiences at work, where, with a fantastic panel of trans people we demystified our lives as trans people, trans parents, trans colleagues and trans friends. 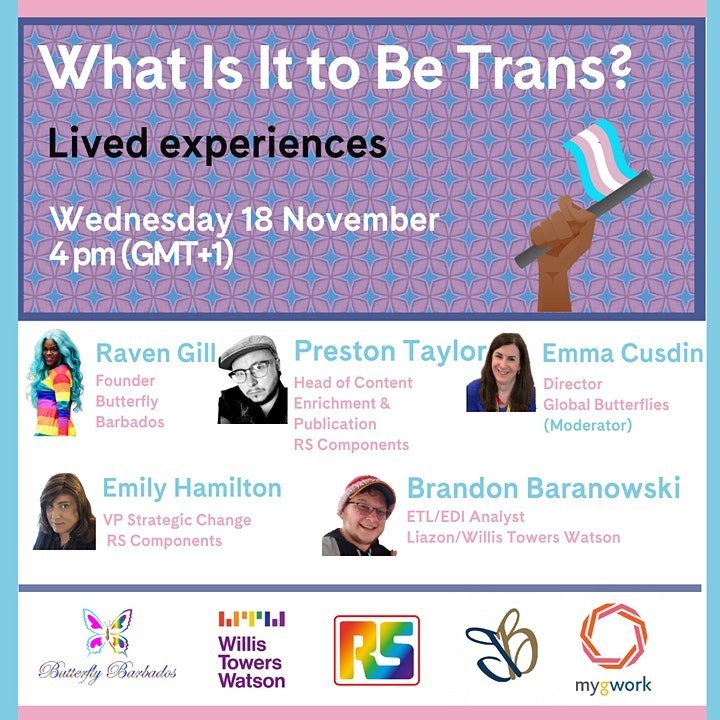 I delivered an hour's awareness training to a partner organisation, and raised $2500 for the fabulous Mermaids Charity. I was invited to speak at an international Mental Health Conference, and took my first trip alone to my home city.  I have become an ambassador for mental health with a particular emphasis on the LGBTQ+ community. 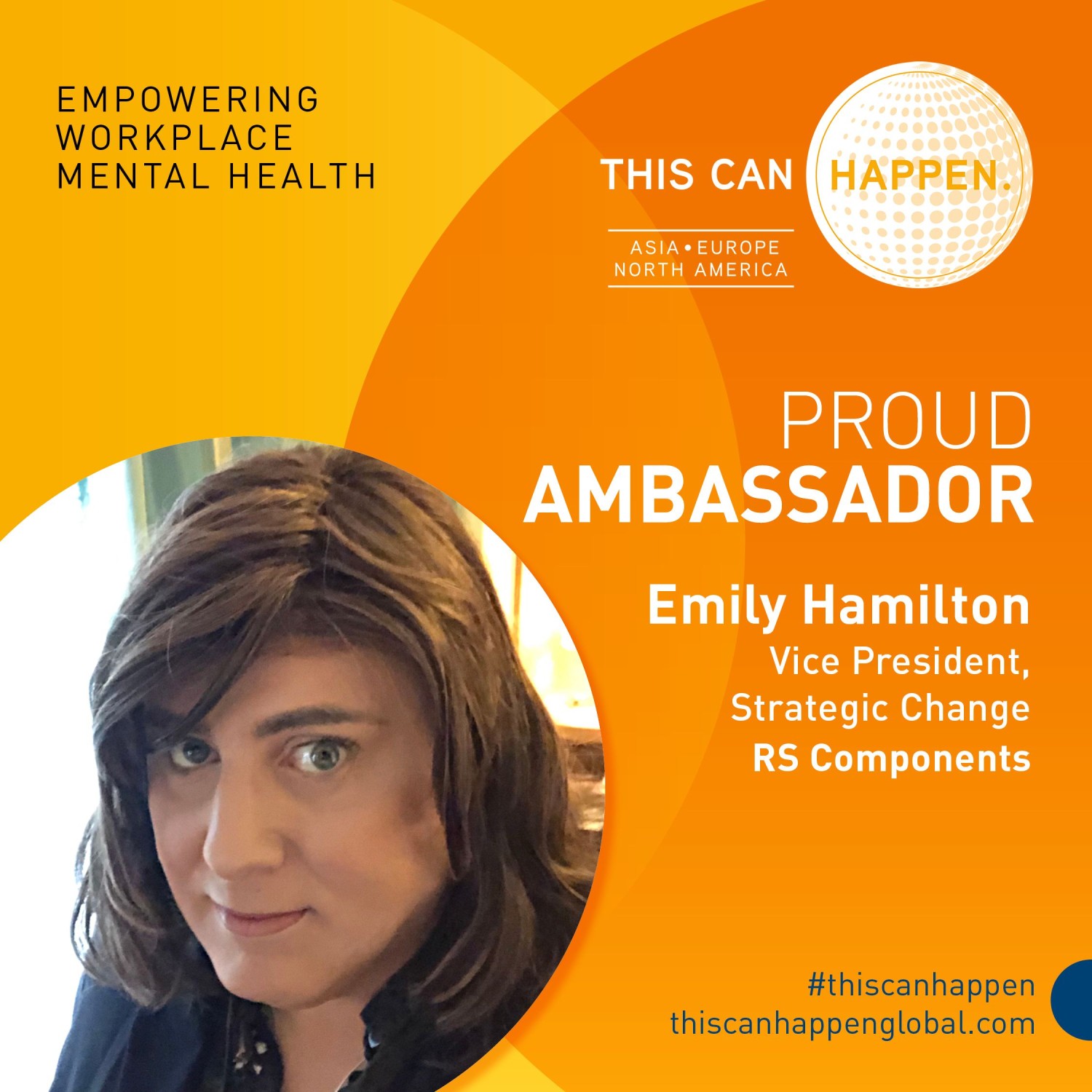 Taking on a visible role for better mental health

And did I mention that I have led a fantastic team in the delivery of strategic change and operational excellence throughout? And this got me to thinking; what has been the impact on the people I work with? What’s it like to work with and for a visible, out, proud trans woman?

So I asked…. I put together a survey for people to respond anonymously; one of the problems the trans community face is that many people don’t think they know any trans people, which makes it easy to accept some of the dreadful things said about us. What has visibility meant this year?

My colleagues reported some interesting things.

I asked my questions in the knowledge that one of the problems facing trans people is that for most cisgender people, they simply don’t knowingly know any of us. My first question was a baseline:

"How would you describe your thoughts about transgender people before I came out?" 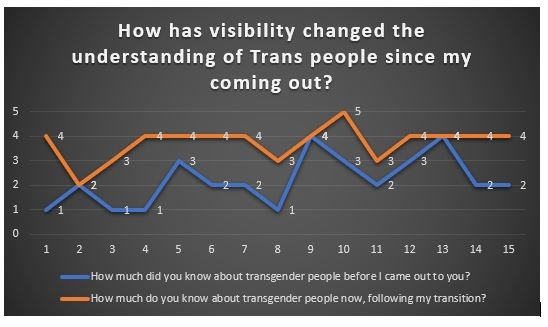 On this point, it is clear that simply knowing a real life trans person, living their life increases awareness and understanding.

The question is, does it increase acceptance and possibly advocacy?

Asked "How have your opinions about trans people changed since my transition (if at all)?"

To my mind this is encouraging, being Transgender, you tend to notice every single article, every news report, every piece of discriminatory legislation which seeks to impose controls and reductions in the right to live openly – whereas for Cisgender people, these things pass them by (unless they are engaged in Transphobic lobbying) and it’s clear that my visibility and openness about being a Trans Woman has improved understanding and provided a counterpoint to the often absurd, usually vicious things said about me and people like me.

Being Trans is about as common as having ginger hair – there are lots of us, more than feel we can be open about it – and the answer to that lies in the hands of the Cisgender community. Being visible, living is not an additional privilege we are seeking, it’s just the basics. Securing medical care is not an additional right or privilege we are seeking – just the same as anyone with medical needs.

And responding to the lives of those you know (and those you don’t) who are trans is transformative.

I asked the question: "In what way do you think I have changed since transition?"

These comments are revealing – people noticing happiness, smiles, confidence – and I feel it! – My own daughter, when I came out to her and shared some photos of me as me, said something which cut very deeply – ‘I love them, because you are smiling, and I can’t remember when you smiled’

The outlier which mentioned being sadder was one to ponder. And I think it’s something worth mentioning, that trans people have been dealing with lockdown, home-schooling, extra work, restructuring, the stresses of life – just like everyone else; but seen through an additional lens of a hostile media and government, so yes, sometimes I’m sad, sometimes I feel stress (and remember – I’m doing puberty again at the age of 44!)

So – a year is done, the first of the rest of my life. It’s not an easy life, and that is not on me to resolve alone. Get to know me, get to know other trans people and in doing that you’ll remove some of those stresses – and let us concentrate on the ones that impact all of us together. 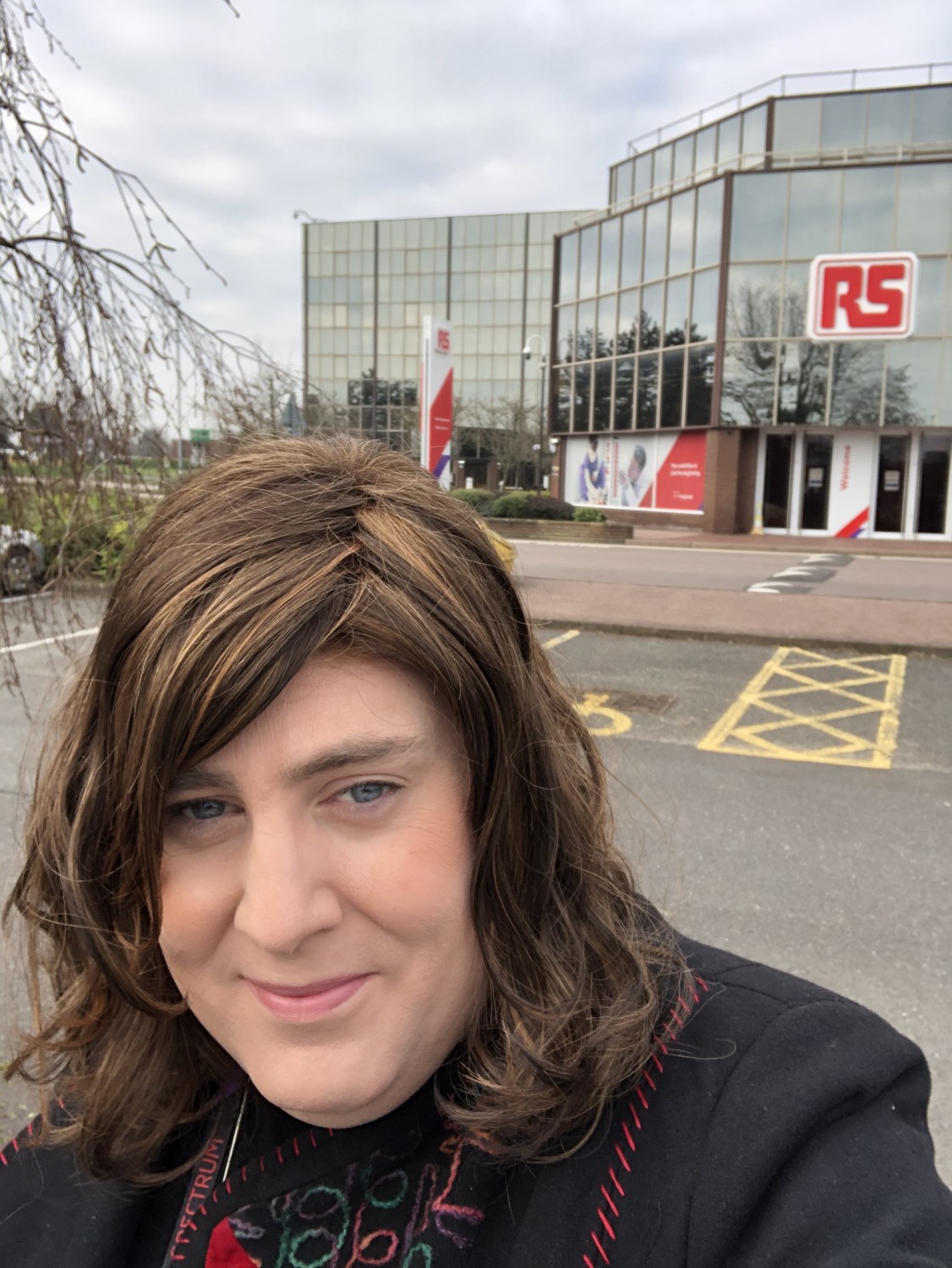