A unique perspective on the world: Brandon’s Story

Brandon Rahul (Data Insight Apprentice) shares his experiences at PA Housing – speaking about joining through the Kickstart Scheme, securing his apprenticeship, and life with autism.

Hi, I’m Brandon and I started at PA Housing through the Kickstart Scheme (the government scheme designed to help more 16–24-year-olds into employment) and my role was in HR as a KPI Assistant. It was originally supposed to last six months but then my contract got extended another three months because PA wanted to keep me on. I was surprised when it happened but also enthused because I was doing well here, and I got along well with my colleagues. Now, I’m moving into my tenth month at PA because I’ve recently secured a Data Analyst Apprentice role in the Customer Experience Team. I got some new clothes for the occasion too because I thought: ‘new role, new look.’ Why not? I think it’s nice to dress up smart; it’s a good way of expressing myself.

The Kickstart Scheme taught me about office etiquette, and it got me used to being in a work environment. It did a lot to develop my social and professional skills too because as somebody with autism, I can sometimes find communication more difficult. Before Kickstart, the only work experience I had was as a requirement in school. In secondary school, I did some work in a pharmacy, and in college, I got some experience with an estate agency. However, Kickstart was great because it got me into a more consistent routine.

I’m glad I’m doing an apprenticeship rather than studying at university because it’s more my learning style. It allows me to pick up practical skills as well as gain some theoretical knowledge, whereas uni can be quite theory focused. Although I might have some exams in my apprenticeship, I never did well with the stress of them in school and this is mainly about practical application. Different people learn in different ways which I think is relevant to neurodiversity and the varied ways we in which we all think. Also, it’s nice to be paid to learn instead of putting myself in debt to study.

I had a hard time in school and my mum knew that I was different from a young age, so she helped me to develop my skills. Although it wasn’t that long ago, there wasn’t as much awareness of autism then as there is now. It affected my learning and there were certain concepts I couldn’t grasp. It got me down as I thought I was just ‘stupid’, but my mum reassured and inspired me. She’s from Hong Kong and she was doing so well in a second language. If she could do that, I could succeed too.

Autism affects people differently; it’s a bit like a fingerprint where we each have our own distinctive qualities. I’ve never really thought of it this way before, but personally, I struggle to project my own identity to others. I sense a social pressure to ‘act normal’ and behave in a certain way that can make me anxious in social situations. So, part of that is if I get very invested in a fictional character and I watch them a lot – or if I just spend a lot of time around certain people – I can start to take on their mannerisms and personality. That’s why my accent changes all the time when I’m speaking. A lot of people are shaped by their environment, but I think I’m especially aware of my surroundings and it affects the way I act in much more immediate way.

Another thing is that I get attached to people very quickly and easily which can sometimes lead to awkward or hurtful situations when the other person is not as invested as I am. In my friendship group though, that can be a nice thing as I’m always very excited and talkative when I see them.

In secondary school, I faced a lot of bullying around my autism and my ethnicity. In college, it was a little bit easier because I found some new friends and there was some support in place. At any point, if I felt stressed, I could leave the class and speak to my mentor. So, there were good moments and bad moments growing up.

Some people may not realise there’s something different about me unless I tell them, or they really get to know me. Often, I tell people quite early on because they may react differently to it, but it’s such an important part of who I am, and it accounts for some of my ‘quirkier’ behaviour. Some of my friends are neurodivergent too – not all of them – but it never changes our dynamic. We’re functioning individuals and we get along fine. We communicate well, we tell jokes, and have fun.

PA Housing is an open environment. From the moment I joined, HR were very friendly, and I felt like I could discuss anything with them – whether that was the news, or how I’m feeling. My new team in Customer Experience are nice and supportive too. They’ve eased me into a new routine, shown me the ropes, and made sure I’m comfortable with my new responsibilities.

My initial duties involved being given information about applicants such as how many applied, were shortlisted, or were offered the job and quantifying this data. I took note of factors such as their genders, ethnicities, or whether they had any disabilities. This helped the business to figure out how to increase applications and diversify our team to ensure that it’s representative of the people we serve. My new role is not too different. I now quantify regional data, response types, as well as contractor information to find out how we can help residents.

When I was in HR, I also took on some additional responsibilities like reading out a training course for a colleague who had difficulties taking in the text – she gave me some really positive feedback for it too! Recently, I saw a government advert on a bus that said, ‘Make your workplace more autism friendly’ which fascinated me and disappointed me at the same time because it should be a given that workplaces are inclusive to people with disabilities and neurodiverse conditions. One of my favourite things about PA is that we care about both staff and the people we serve.

Humorously, I think the biggest challenge in my role is just getting here every morning. It’s just that I don’t have a car, public transport has been a little unreliable around me lately, and I prefer working in the office. So, I have a 40 minute walk each morning… which is nice in some ways as I get some exercise and I get to see more of the city. Besides that, everything’s great! I know what I have to do, everybody is respectful, and it’s a healthy work environment. 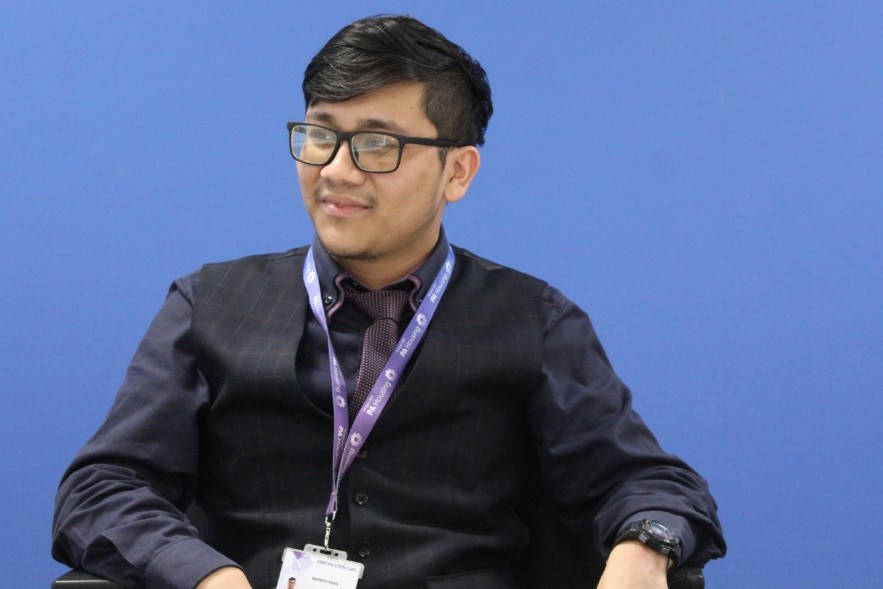 In my spare time, I’m a HUGE nerd. I enjoy video games, looking at internet memes, listening to music, and I daydream a lot… I do focus on my work though. I have a bit of a knack for creative writing and so I’ve been working on a story for some time now that is partly based on my life but also contains a fantasy story that reflects the moments in my life. In the fantasy part, I have a character, Lillian, who Is seen as somebody who doesn’t belong because her mum is from a different dimension. She sees her character traits as different ‘avatars’ – a bit like in the Disney Pixar film, Inside Out. The avatar that represents aggression appears as a bully, which she focuses her anger on – but really, she’s directing those emotions at herself. It’s based around the idea that certain traits can become you if you let them.

When I was younger, I felt like I had an angel and a devil on my shoulder that represented the good and bad parts of myself. Now, I imagine many of them that all represent different traits. The way we perceive the world differs from person to person, and that is definitely the case with neurodivergent people. This is just my personal perspective on it…

At PA Housing, we’re proud to celebrate the fact that Everybody is Unique. If you would like to join our lively and diverse team, take a look at our current vacancies here. 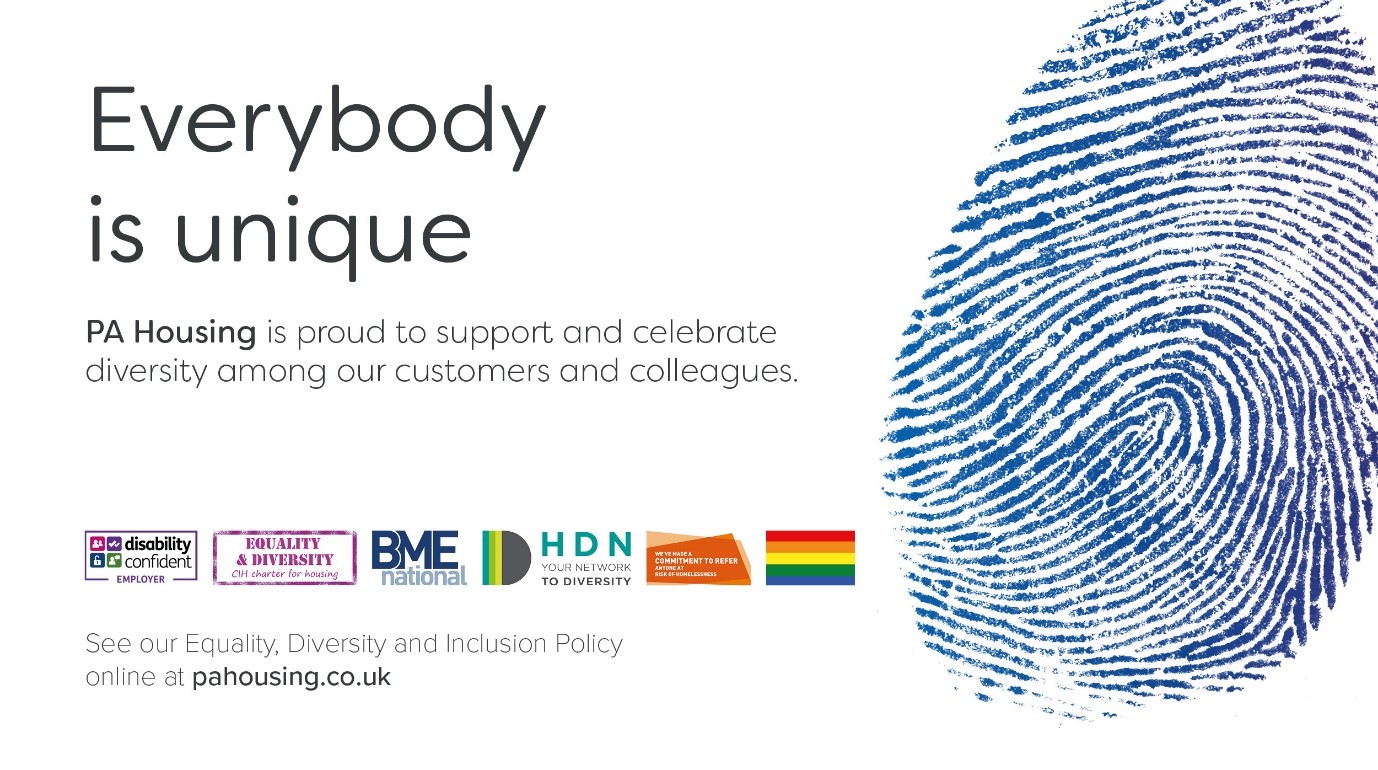 Here at PA Housing, we pride ourselves on the diversity of our staff team and a key aspect of this is diversity of belief because it allows us to gain insights from a broad range of different culture...