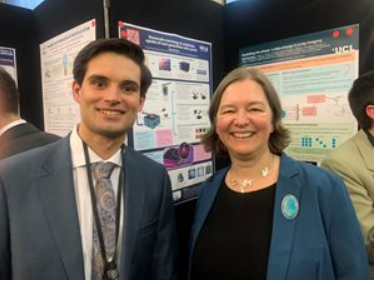 STEM for Britain is an exhibition of posters by early-career research scientists, engineers and mathematicians.

The event raises the profile for Britain’s early-stage researchers at Westminster by engaging Members of both Houses of Parliament with current science, engineering and mathematics research being undertake in the UK.

Filipe Richheimer, Higher Research Scientist at NPL, presented his research in nanoscale metrology to accelerate the uptake of next generation solar panels. Amongst other applications, nanoscale characterisation can be used to decarbonise energy generation supporting the UK government in achieving net zero targets.

Running in the Engineering Exhibition, Filipe was able to showcase his work to a number of established researchers in the field, industry stakeholders as well as local MPs. Both Munira Wilson, the MP for Twickenham, as well as Fleur Anderson, MP for Putney, Southfields and Roehampton showed great interest in the work developed, including a tweet by Fleur Anderson.

Filipe Richheimer, Higher Research Scientist, NPL said: “I am really excited to be representing NPL at the Houses of Parliament. It’s great that researchers at the beginning of their career have the opportunity to promote their work at the highest level.”