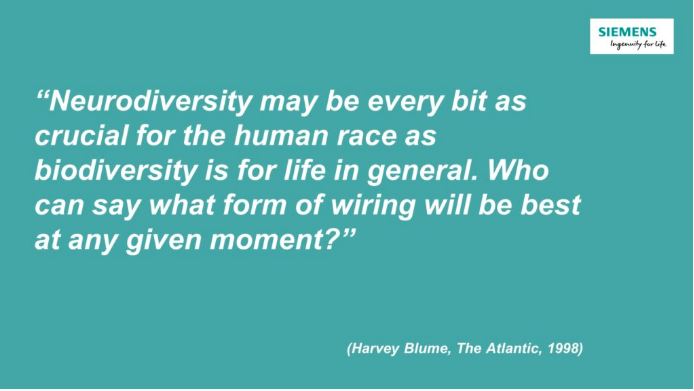 It’s National Inclusion Week in the UK. To celebrate this, and to build upon the work we have been doing so far to increase the awareness, acceptance and enthusiasm for Neurodiversity at Siemens, I interviewed Rohan Beck in our DI business at Manchester, about his experience of working at Siemens as an autistic employee. 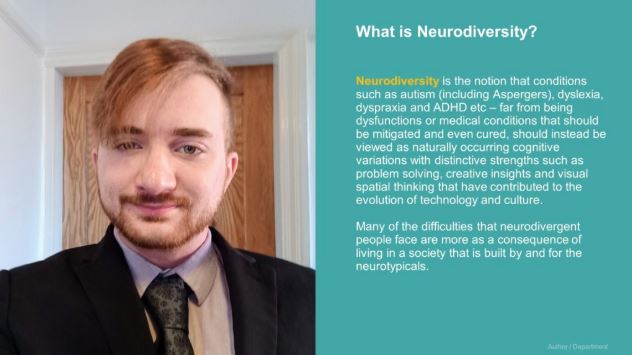 I started at Siemens on the Manchester DF&PD (now DI) graduate scheme in October 2018, as a graduate engineer. My first placement was in Tech Support, and I’m just coming to the end of my second placement which is with Motion Control.

When were you diagnosed with autism and what prompted you or your parents to seek a diagnosis?

My mum has said she always suspected that I was on the autism spectrum when I was little, but she never sought a diagnosis for me because she didn’t want me to be “burdened with a label”. I can see where she was coming from, but that turned out to be an unhelpful decision, as it can be very difficult to get extra support in place without an official diagnosis. On her advice, when I moved out to go to university, I went through the adult autism service to get a diagnosis, to help get extra support in place while I dealt with the challenges of living on my own for the first time.

I largely enjoyed my time at school, especially sixth form. I’ve always really enjoyed learning and been academically successful. Socially it was a bit more difficult, as young people can be a bit unforgiving about people who are perceived as “weird” or who have some difficulties with social skills, but luckily for me, I had a small group of close friends – many of whom I’m still friends with now – which made it a lot easier to ignore any mean comments from less accepting students.

While I enjoyed learning and got pretty good marks across the board, I also spent a lot of time getting in trouble – often for failing to follow rules which didn’t make sense to me. I have a vivid memory of getting into a shouting match with my maths teacher when she told me off for reading a fiction book during a maths lesson – but I had already finished all the assigned maths questions. She said that didn’t matter and that I should put the book away because she said so, and I thought that was ridiculous, and told her as much. I was also never very good at staying in my assigned seat – my French teacher actually made up a song about it, which she would sing whenever she noticed I’d wandered off.

Are there any benefits that your autism brings to your role at Siemens?

Communicating directly and honestly (which can in some social situations can be seen as a problem and lead to us being called “rude”, “blunt” or “thoughtless”) can actually be really helpful professionally, especially in a technical and/or business role. Technical conversations can obviously always benefit from clear and direct communication, but even the less technical discussions can often benefit from an autistic communicator, and the honesty is often seen as refreshing.

I think the main benefit of my autism for me personally is that I can be highly focused and detail-oriented, which has really helped me during university and with technical projects I’ve been involved in during my career. If something is interesting to me, I can spend hours working on it – especially if it’s a project which involves solving an interesting problem. A 2009 study showed that autistic people were up to 40% faster at problem-solving than neurotypical peers – I don’t know if I’m particularly fast at solving problems, but I do know that my favourite projects in my career have been when I’m given a technical problem to solve. I love to get stuck in and really focus on a challenge – although not as much as I love the feeling of coming up with a functioning solution! This links to another benefit of autism, which is unabashed passion for the things we care about and are interested in.

What challenges do you experience at work as a result of being autistic?

The main challenges tend to be the implicit aspects of a job role, rather than the explicit ones – for example, I contribute well to teamwork when there is a defined project to work on and specified roles within the team, and in meetings I communicate well. However, I struggle a lot with spontaneous small talk, and things like remembering people’s names – I have some issues with face recognition (prosopagnosia), and without contextual clues I probably need to meet you a number of times before I learn to recognise you and connect your face with your name. These may seem quite small and unimportant things, but to someone who doesn’t know me or doesn’t have a lot of knowledge about autism, meeting someone who doesn’t engage in small talk and who forgets your name can easily make it seem like that person is rude and uninterested. This is a problem when you want to build a positive profile within an organisation – I definitely don’t want colleagues’ impressions of me to be that I’m rude and uninterested in them!

Other challenges include sensory sensitivities and social overload from the high level of interaction required in the workplace. I can’t “filter out” background sounds in the same way neurotypical people can, so I can be distracted by a phone conversation occurring four or more desks away in a shared office space, or notice the sound of every keyboard tap by someone typing nearby (if this becomes an issue I usually deal with it by wearing headphones). I deal with social overload by eating my lunch alone, and reading or watching something on my iPad, which gives me a short break in the middle of the day, in an approximation of “alone time”. I’ve explained this to the other graduates, who usually eat together – because, again, I don’t want to seem rude!

If there was one thing that Siemens could do to make your time at work easier, what would it be?

With flexible working, championing diversity and the recent focus on creating an autism friendly workplace, this is already one of the best places I’ve worked in terms of feeling supported as an autistic employee. I think the main thing that makes my life easier is awareness, so I would just ask for the continuation of this information campaign – increasing knowledge about the benefits, as well as the drawbacks, of autism in the workplace. The more that people know about autism, the less I have to worry that they’ll doubt my ability to do my job – just because my contributions to spontaneous conversations can sound stilted and awkward, it doesn’t mean that’s how I’ll come across in meetings or presentations when I’ve had time to prepare and know what’s expected of me!

If there was one thing that you would like other people to know or do differently, which would have a positive impact on you, what would it be?

Remember that there are a lot of benefits to having autism as well as the difficulties – it can be disheartening if I only hear people talking about how hard it must be to be autistic, or how hard it is to raise autistic children. Having autism is an impairment, but my disability is caused by the world not being set up to accommodate autistic peoples’ needs, not from the fact that I think differently.

If you’ve only ever heard about the negative aspects of autism, do some research online or talk to an autistic person about what positive traits they have from their autism, and any ways they think their autism is helpful – either in their day to day lives, work/study/volunteering, talents, or hobbies. The answers may surprise you! The common stereotype is that autistic people can be very good at science or maths, or at remembering facts – but some autistic people are incredible artists, musicians and actors, if their special interests lie in a more creative field. Their ability to focus for long periods of time combined with their passion for what they do can lead to some incredible pieces of artwork.

Thank you very much Rohan for sharing your experience.