This International Women’s Day, we profile Inspire, our employee network for gender equality. 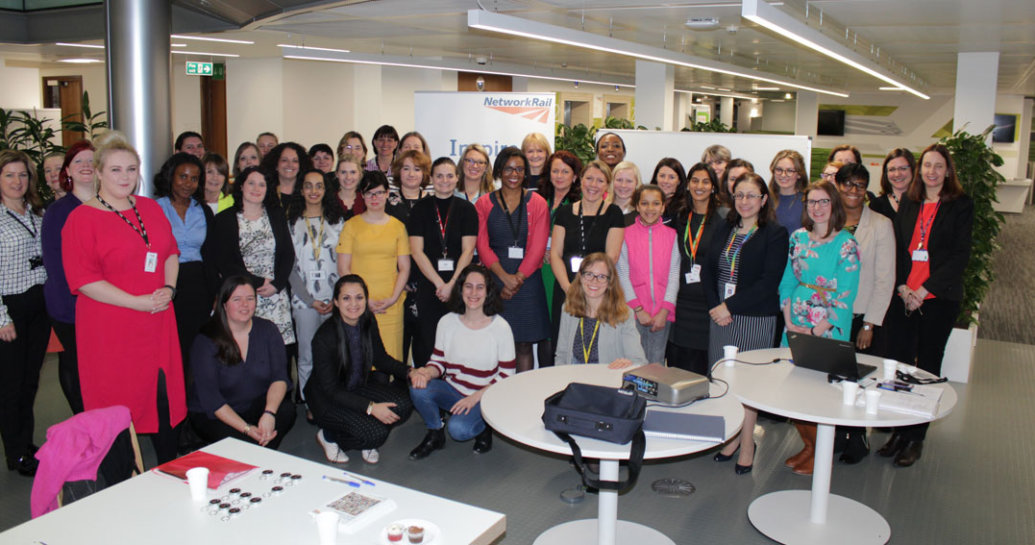 Inspire presses for progress on creating a fair and supportive working environment for people of all genders at Network Rail.

It’s one of six employee networks that contribute to a more open, inclusive and diverse organisation.

Set up in 2014, Inspire’s founding aims were to support other women in Network Rail and help encourage women to see the organisation as an employer of choice.

These continue to be an important part of what it does today, but as the network has grown, it has developed a wider focus to support Network Rail’s objectives for safety and culture. Inspire now champions, for example, the provision of inclusive facilities in the workplace, an inclusive culture and career development opportunities for women.

It is itself a network of networks, with local groups across the country holding events and promoting nationwide initiatives and Women In Rail events or programmes, such as its popular mentoring scheme and discussion panels.

What’s the best piece of advice you’ve ever been given?

My mother has always told me that I could achieve anything I wanted, as long as I put my mind to it - something I am grateful for and is still something I live by today.

What advice would you give to girls and young women today?

The only thing holding you back is not trying. If you try and fail, try again, but slightly differently. There is no reason why you shouldn’t be able to achieve what you want, just because of your gender.

You will learn from success, but may learn even more from failing, so don’t be afraid to try.

Inspire's membership has soared in the past two years, rising from more than 500 in 2017 and almost doubling last year to just under 1,000.

Grace Bannon, vice chair of Inspire and financial and commercial lead at Network Rail, joined Inspire in 2016. She said: "I liked attending Network Rail events... During my journey home, I realised that out of the fewer than 100 attendees, only seven were female. So when I saw a call for candidates for the Inspire vice chair position, I jumped at the opportunity to support changing the gender balance at Network Rail."

Inspire will be at the forefront of our International Women’s Day celebrations nationally.

They include talks on the ‘balance for better’ theme, workshops on women in rail and career progression and a session on negotiation skills.

Meanwhile, we’ll take part in careers and apprenticeships events, including Future Female Engineers - an event at Network Rail in Milton Keynes that will give career advice to female undergraduate students.

The achievements and progress of the Inspire network demonstrate significant levels of engagement in women at Network Rail. The commitment of the members and our allies to support the business to improve gender equality has exceeded expectations and deserves to be celebrated today.

Network Rail recognises that gender diversity and equality will not be achieved without men helping to facilitate a culture change. With male membership of Inspire relatively low, the Inspire team set about to change its perception by engaging men to help make Network Rail a more inclusive workplace and an employer of choice for women.

Inspire Allies was launched in September 2017, actively appealing to men to get involved and share their thoughts. Since then the number of men supporting Inspire has grown by more than 50 per cent and looks set to increase further, although there is still a way to go before numbers are more representative of the business.

Inspire Allies promotes flexible working, shared parental leave and paternity leave, and challenges behaviours that get in the way of the business being open, diverse and inclusive.

Allies are asked to make commitments to ways in which they can help with gender equality in the workplace, from specific ways to raise awareness and support an inclusive culture, to how they can ensure inclusive recruitment and interviews and support mentoring and coaching.

Grace said: "We would like to reach more people, so we are working on supporting the creation of more local networks and are focussing efforts on reaching front-line employees. The Inspire Allies network will be instrumental in reaching more areas in Network  Rail."

The 20 by 20 project, led by the Diversity and Inclusion team, is reviewing the way Network Rail attracts, recruits and keeps women in the business; increasing the number of women apprentices and graduates; and making sure that the organisation removes any practices and processes that have the potential to discriminate against women.

In February, Inspire held a follow-up event to its Inspire Development Day in 2017. The more recent London edition was bigger, featured external speakers and included attendees from the Department for Transport and Transport for London.

Grace said: "The first Development Day had a nearly exclusively female audience, but this year, about 20% of the attendees were men - something I am proud of and reflects the journey that Inspire has been on to transform from a women’s network to a gender equality network."

Seven jobs you didn t know existed on the railway April 22, 2020 The railway offers a huge variety of career opportunities, from 3D modelling to protecting our biodiversity. If you love anythin...