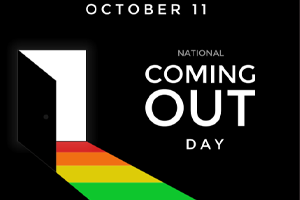 As part of the launch of CityFibre’s LGBT+ Network, and in celebration of National Coming Out Day, Neil Watson wanted to share his story of how he came out.

Like most people, coming out as a gay man wasn’t a single event for me. It was a process that started at age 20 to a single friend. I needed to be in a foreign country, at the start of a six-month placement, away from family and close friends, to muster the confidence to utter the two simple words “I’m gay”.

Despite being friends at uni for a couple of years, I had no idea how she would react. I was working on the principle that I was on my own for 6 months, so if she didn’t want to know me, then it wouldn’t make that much practical difference. Fortunately, it made absolutely no difference to her – a huge weight of my mind.

Six months later, I came out to my friends back at home. I’d known this group of friends since we’d first met at age 8, this was a huge deal. It was on a night out, with the help of Vodka, that I told them one by one. The unanimous reaction was that they were waiting for me to tell them – they’d suspected for years. It was at this point that I discovered that two other members of that group identified as gay.  This was a complete revelation to me, I hadn’t even considered that anyone I knew would be 'like me'. Suddenly, I realised that I wasn’t on my own. That night was truly transformative for me in terms of confidence and self-belief.

Coming out to my parents came a couple of years later, but wasn’t my choice of timing. Without going into details, an ex-boyfriend threatened to tell my parents, and so I took control and did it myself. There were lots of tears, and it was a very emotional night, I was still their son, and they’d always love me.  However, they didn’t want me talking about it in the house etc. as my brother was still only 10 at the time. Consequently, we didn’t really communicate with each other for the next 5 or so years outside of the day to day minutiae. This was a massively negative part of my life due to not being able to be myself around the people I loved. At the time, I came out to the people at work, without a problem.

I was also a Scout Leader, and at the point of coming out to the fellow leaders, I faced a barrage of negativity and prejudice. Half of the leaders in the local group threatened to leave if I remained a member. I contacted the Scout Association, who fully supported me. Still, I eventually took the decision to leave to keep the group going for the Scouts. These fellow leaders were people that I’d known since the age of eight and had grown up with. I had respected them, and they had been part of moulding me into the person I had become. By coming out to them, I had lost their respect and trust. As a result, I decided that they were negative influences in my life and so cut out all interaction with them.  I continued to work with the Scouts at a different group, but it was never the same again.

All of this happened without me being able to talk to my parents or family, and I felt completely alone.

Five or six years after coming out to my parents, I eventually came out to the rest of my extended family, on the night of my Dad’s 50th birthday party. This led to a conversation with my parents, where we talked about the situation. I had never raised the subject again as I didn’t think they wanted to talk about it, they hadn’t discussed it because they thought I didn’t want people to know. This was a huge miscommunication that led to missing out on 5 years of a close family relationship.

I ultimately came out to my younger brother the next day – it turned out that he’d known for a couple of years, as someone at school knew through their parents and had told him.

The family relationship today is as strong as it could be, and I consider myself to be extremely lucky.  I don’t come out to people anymore, I’m just me. I openly talk about my husband and the life we lead together. Close friends from work even came to the wedding, all of my family were there and were supportive. The friends that supported me through my Scouting troubles came too. The ones that weren’t there were those that had been a negative influence in my life – I’ve got no time for that anymore.

Pride Comes to the Seaside

Members of the CityFibre LGBT+ network headed to the famous Winter Gardens in Blackpool on Saturday 6th November. The inaugural Winter Pride, including a Youth Pride area alongside the main event, wa...

With over 14,000 attendees from Milton Keynes and around the UK, MK Pride showcased community, music and comedy along with a funfair, rainbow market and food village, ensuring festival goers made the...

At CityFibre, our employees are at the heart of everything we do. We are dedicated to creating a great place to work across all areas of our business for each of our team members. We’ve recently bee...

Intersectionality is best practice in the workplace, Kat's story

According to the World Health Organization, there are over 1 billion people living with disabilities worldwide. Further, there is a significant skew in the rates of employment for people with disabili...