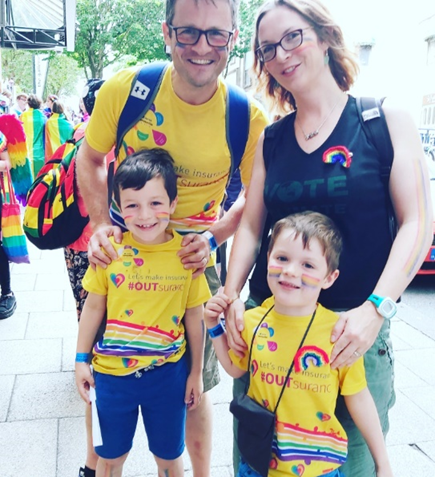 This summer Pete, who is part of our General Insurance Comms team, attended his first ever Pride parade, along with his two young sons. Here, he shares what it was like to be part of Bristol Pride.

On Saturday 14th July I embarked upon my first Pride march accompanied by my two sons aged 5 and 8. My better half has been working on Pride for her employers and asked what I planned to do with the boys, as I would be the one “on duty”. I’ve been an ally for the last 20 years or so (I just didn’t know what it was called) so having seen the invites from the Aviva Pride network in Bristol we quickly decided to join them on the parade.

As we all stepped out of the door to head into town, I must admit I was a little unsure of what to expect (mainly as a result of having to control 2 young children on a mass parade). However, from the second we turned out of our road the experience began and was nothing but positive.

On the way to the bus stop we met some of my children’s school friends and their families who were heading into town for the parade, once on the bus we were greeted by more rainbow flags, wigs, outfits and the experience just built from there.

On arriving in the centre (and after applying rainbow paint to half the people who got off the bus with us) the boys both realised that they could make maximum noise with no consequences and used their pocket money to buy rainbow whistles.

We then set about finding Darren, Jimmy and the rest of the Bristol Pride team.

Once we found them, our job was to help hand out the many jelly beans, rainbow laces and face paints we had on offer and my 5-year-old led the charge. We try to raise our boys to treat everyone based on how they act rather than how they look, and he did exactly this — marching straight up to a group of loud and colourful drag queens before declaring “Who wants some jelly beans?!”

After the wonderful reception he got there was no stopping him. He had no other agenda than to share his almighty bag of Pride swag, setting the tone for his (briefly) more reserved big brother to join in with gusto. 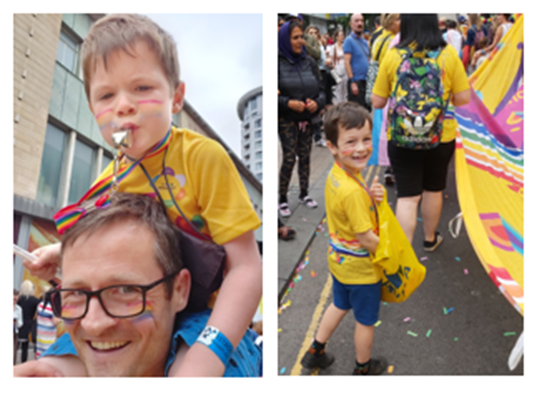 Pete and his sons hand out treats to the crowd during the parade.

Then we hit the streets of Bristol as our part of the parade trundled towards Broadmead. I’ve always been proud to live in Bristol and seeing the reaction of the clear majority of Bristolians did nothing to change this. We were caught up on a rainbow wave of smiles, cheers, noise, banter, positivity and obviously Pride.

Unsurprisingly we passed a few of the regular fire and brimstone, megaphone-toting preachers that frequent the centre of Bristol. Each of them eager to proclaim that we should be saved from sin. At least that is what I think they were saying as they were drowned out by cheers, whistles, drums, vuvuzelas — no negativity and confrontation just more noise as the celebrating consensus swept past.

We then encountered another bigger group of Christians, all of whom proclaimed to a cacophony of cheers that they loved everyone and were dishing out free hugs to anybody who wanted one. On this day, love did win.

Despite the huge amount of fun, we all had, I also learnt a lot. I learnt about how many different flags and groups there are in the Pride movement (Transgender, Pansexual, Asexual, Minority LGBTQA+) and I would imagine I have barely scratched the surface — I will try and learn more. I learnt that maybe I need to continue challenging my own unconscious biases — it took a while for me to overcome the urge to stop the boys from talking to people from weird and wonderful looking groups that I’d never even contemplated, all of whom greeted them with warmth and kindness. I learned how lucky I am.

A much older couple marching in front of me appeared to keep forgetting that they could hold hands and kept retaking each other’s hand every few minutes. As the proverbial ‘pale stale male’ this is something me and my wife take for granted, a fact I will try and be more mindful of going forward.

Finally, it made me proud. Proud to work for a business that not only supports the Pride movement but encourages all colleagues to support it too. If I didn’t work for Aviva would I have been a part of this year’s parade?? Probably not. Will be joining in next year regardless of what I do for a living?? Pass the rainbow face paint!!

Women in tech at Aviva - Building an industry for everyone

Our ambition is for everyone to achieve their potential, no matter who they are. However, too many women see technology as a career path that’s closed to them. Through our Women in Technology progr...

Progress towards gender equality in the financial sector remains frustratingly slow. Women, companies and society could be waiting 30 years when parity is achievable in just 10 years.  On the eve of I...

Seven steps to help protect homes, businesses and communities from climate change in the UK