My apprenticeship journey at DIO 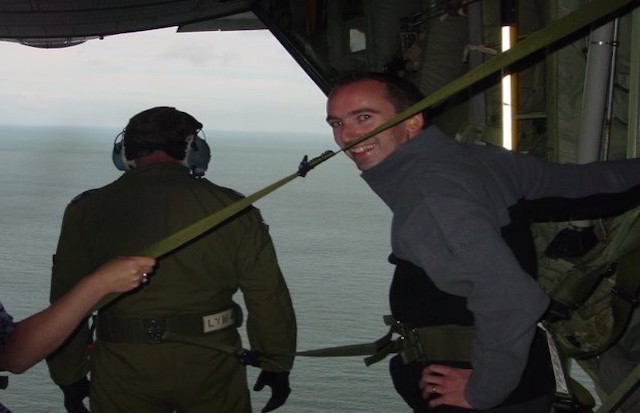 Warren onboard a Hercules C-130J, one of the benefits his had working as an apprentice in Defence. [Crown Copyright/2006]

Without question, my apprentice roots have not only shaped who I am, but have deeply influenced my work, career, even my family and friends. After such a positive experience, you won’t find a more passionate apprenticeship supporter!

My journey started straight from school in 1987. I was lucky enough to secure a Ministry of Defence Technician Apprenticeship in the naval weapons area. I had a choice of specialising in mechanical or electrical/electronic engineering and opted for the latter as I’d grown up surrounded by disassembled radios and TVs that my father repaired in his spare time.

Some say your school days are the best of your life, but I seriously doubt that as I look back fondly on my apprenticeship. For four years, I alternated between academic study in the city of Bath and practical experience at the apprenticeship training centre, Royal Navy Store Depot near Corsham.

Each summer was spent on work placements at different naval establishments putting into practice the skills I’d learnt. These opportunities helped cement my long-term career in defence, rewarding experiences that money simply can’t buy! I started small, day trips at sea on a new Royal Navy frigate (hosted by the Captain on the ship’s bridge) or climbing to the top of an aircraft carrier’s mast to inspect the surveillance radar, requiring a head for heights which I’ve now lost. Everything from recording acoustic signatures of ships and submarines from the middle of a Scottish loch, to igniting rocket motors at an explosives range after which any fireworks party is never quite the same. It’s opportunities like these that make working in defence so special.

Like most training, apprenticeships equip you with life skills not just work skills. My first year was spent in a mechanical workshop learning engineering techniques that have served me well, whether fixing the car or completing DIY. Having joined with 24 other apprentices it was also incredibly social and fun and has resulted in enduring friendships. Since graduating, my apprenticeship experience has shaped where I’ve worked and lived, the roles I’ve taken on and even who I married after a chance encounter on an apprenticeship birthday reunion where I met my  wife!

The foundations of my career

This apprenticeship helped build the foundations of my career that has led to many exciting and rewarding roles across the air, land and maritime sectors, roles I’ve really embraced and thoroughly enjoyed. My career has mostly been in the project delivery profession and across all phases of the project lifecycle, from research to disposal, from bombs to buildings. It’s been a journey that’s allowed me to travel extensively across the UK and the United States, experiencing many unique and memorable opportunities. For example, I’ve spent a lot of time at sea with the Royal Navy as a Radar Trials Officer and plenty of time in the air, most memorably low level night flying through the Welsh valleys wearing night vision goggles after replenishing troops on Salisbury Plain with parachute drops, tactical take offs and landings without spilling your tea and even off-roading in a fire crash tender.

I’m proud to have spent the last five years at DIO working closely with the British Army to build the infrastructure needed to successfully enable the return of 20,000 service personnel from Germany under the Army Basing Programme. I currently lead the Major Programmes and Projects Army Team; a fantastic group of talented individuals that are geographically dispersed around the UK delivering the Army’s major capital infrastructure needs.

Like everything, apprenticeships have evolved massively since I completed mine nearly 30 years ago, the latest offerings across DIO are not focused on the start of your career, they can be taken by anyone, of any age and level and they are incredibly diverse and designed to enhance your knowledge, skills and experience. Don’t miss out on the opportunity to have an incredible career, look out for opportunities to work with DIO on VERCIDA.

As DIO’s Graduate and Apprenticeship Lead, I’d like to share the work I’ve done to support our apprentices in navigating through the COVID-19 pandemic. But first I’d like to tell you a little bit abo...

DIO STEM Network Lead Sarah Young My name is Sarah, and I work for DIO as a Customer Engagement Manager it doesn’t sound very STEM, in fact, it’s not, but it does allow me the opportunity to networ...

Cpl Stewart Angus and his family were the first to move in to a home refurbished under this programme. DIO's Head of Accommodation, Air Commodore James Savage, handed over a Christmas wreath to Cpl A...

One year on and another Ramadan during in some form of lockdown restrictions. You may have read my article last year?! When we first went into lockdown, I certainly didn’t think a year on from then w...