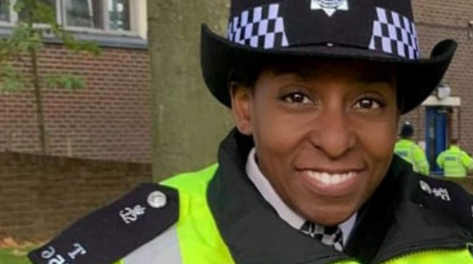 Growing up, Adina Lindsay always knew she wanted to make a difference. Initially joining the Metropolitan Police as a communications officer, following a career break, she moved to a caseworker role in the reference and vetting department.

Alongside her work in screening new recruits for the disclosure and barring service, she became a special constable in 2019. Volunteering as a police officer in her free time, she helps to safeguard the community, protecting those most vulnerable.

What was your main motivation for joining the Met?

My childhood dream was to become a police officer, so joining the Met has always been a true vocation and ambition for me. As a 10 year old in the early 90s, I was completely mesmerised by a visit to my school by local police officers. It had a profound effect on me and at the end of the visit, one of the officers stuck an ‘I’ve met the MET’ sticker on my jumper and that seed was planted!

My journey in to joining the Met however, was not a straightforward one, and life often has a way of steering you off course before re-routing your journey again. Before joining the Met, I worked in the community for a few years as a support worker for vulnerable adults and regularly volunteered at my local children’s centre and senior citizens lunch club. So I suppose, I have always naturally been drawn to roles of a caring, protective nature and to being pro-active in getting involved.

I initially joined the Met in early 2006 as a communications officer, answering 999 calls at Lambeth, but shortly afterwards took a career break to devote myself to becoming a mum for the first time. I remember at the end of that very first interview, a senior officer on the panel asked ‘’I just have one more question for you, why are you not joining us as a police officer?’’ It was a question I had not prepared for as it was not the role I was applying for at the time, but it meant so much to me (and still does) that he saw that ability and potential within me. It kept me focused for the next few years in the belief that I would one-day return to the Met to fulfil that ambition.

Can you describe what it is like in your role day-to-day?

The main role I hold is as a caseworker in reference and vetting. It is a large department, responsible for internal vetting checks as well as conducting background checks on behalf of the disclosure and barring service. The training is a rigorous process requiring a high standard of quality and attention to detail. This is because protecting the most vulnerable members of our society is at the heart of what we do. I have been there almost four years now and last year progressed to becoming an accredited caseworker, which is an achieved competency of a higher level of decision-making. I am hugely proud of this and love doing a job that I know has a direct impact on protecting people, just like those I once supported in the community.

In 2019, I also achieved my ultimate ambition and became a special constable. I have just completed my first year and what a year I chose to do it in! Every time I put on my uniform, it instills me with pride and I often think of the 10 year old me that longed for the day I’d get the chance to wear it and get out and do the job. It is never lost on me what a responsibility and privilege that is.

In your role, have you had to overcome any significant barriers?

When it comes to family and friend’s I can honestly say I didn’t come up against any significant barriers at all. It’s been my passion for so long that that’s how people know me. My dad (like most dads) expressed some concern for my safety and the sad reality that pockets of discrimination still existed internally (referring to his own experience as a young man in the 1970’s). My mum already had a long-standing career with the Met before me as a chef working at several Met buildings including the ‘Old Yard’. I’d often hear how she was tasked with feeding large numbers of hungry officers on the odd weekend if they were on operations and I would live vicariously through her experiences. My parents have always been very supportive of both my roles and in providing much-needed childcare for my son to enable me to fully commit myself to my work.

I think the Met have made huge strides towards encouraging people from BAME backgrounds to join the organization in both civilian and frontline roles and I enjoy seeing and commending all colleagues who have made significant contributions. However, I feel there is a lack of representation of people from BAME backgrounds across the board, particularly in terms of specialisms and at senior management level. There is still work to be done to make our workforce more diverse, with employees from every background.

What is the most enjoyable aspect of your current role?

I’m a bit of a perfectionist and so have a tendency to sometimes set the standard for myself unnecessarily high. However, in my role as a caseworker, this is exactly what it requires and so I enjoy processing cases and paying attention to and spotting the small details that can make a big difference to determining the outcome.

In my role as a special constable, one of the duties I found most interesting (before lockdown) was providing support as aid to large events like Remembrance Sunday, football matches and special operations. This year I was looking forward to policing my first London Marathon and Notting Hill Carnival before they were cancelled due to the pandemic. There is just something about being part of a large police presence and engaging with members of the public, being visible, active and approachable. I think it is still a very effective, simple way of policing that places you right at the heart of keeping people safe and spotting any potential issues. It also relies heavily on working together as a team and having each other’s backs.

Are there any key moments that particularly stand out during your time at the Met?

At the start of the lockdown in late March, I put myself forward to be involved in policing the newly built NHS Nightingale Hospital at the Excel Centre. I remember feeling quite anxious about it, not knowing then how hard the impact of Covid-19 was going to be on us all. There was lots of buzz with the press and members of the public who had all turned up to witness the first sight of the Army airlift in the first Covid19 patient via ‘Chinook’. It was great to experience and know I was helping towards this huge effort of securing the site and providing reassurance and safety for the many doctors and nurses who had travelled from around the country to staff the hospital.

My passing out ceremony was of course also a very special day for me, going up to receive my graduation certificate from the Deputy Assistant Commissioner whilst my parents and son cheered me on.

2019, was not only the year I became a special constable, it was also the year the Met celebrated 100 years of women in service. Along with a small group of colleagues, I took part in the historic procession marching from Birdcage walk and down the mall to Horse Guards Parade on International Women’s Day. I also had the opportunity to have a brief chat with the Commissioner who was kind enough to take a couple of pictures with me. It was an amazing atmosphere of togetherness and celebration.

Black History Month to me is all about the inclusion, recognition and celebration of contribution’s black people have made throughout history and continue to make. I am a third generation descendent from the Windrush generation. I was very proud to see the Met acknowledge and celebrate the pioneering achievements of those Afro-Caribbean migrants from the commonwealth who were invited to come to Britain’s aid and help re-build the economy after the Second World War. It still amazes me to think that ‘Windrush Day’ was only officially recognised as a day for celebration on 22nd June 2018. Seventy years after those first migrants arrived. This is what Black History Month means to me.

I still very much believe in the Met’s vision and values in keeping London safe for everyone, whatever role you decide to take on. You are always very much aware that this is truly at the heart of everything we do and therefore you feel a real sense of pride in doing something worthwhile and playing your part. Knowing I have a direct impact on helping to keep our wonderful city safe, particularly for vulnerable Londoners, is one of my main motivating factors for joining and staying in the job.

There is also plenty of choice in the various career paths you can venture down to keep you fulfilled and continuously challenging yourself. I hold both a civilian and frontline role that have been whole-heartedly supported by my managers, in order to make it a smooth and workable transition and create a work-life balance.

I would say to anybody considering a role in the Met, try not to have any pre-conceptions and come and experience it for yourself. It’s a fantastic feeling to be part of the wider Met family.

Personal and unique stories of officers proud to work for the Met will be showcased in a series of public blogs during October to mark this year's black history month. Each blog will detail a differen...