Frank didn’t know who to turn to but has praised us for stepping in and continuing to help him when he reached his lowest point. 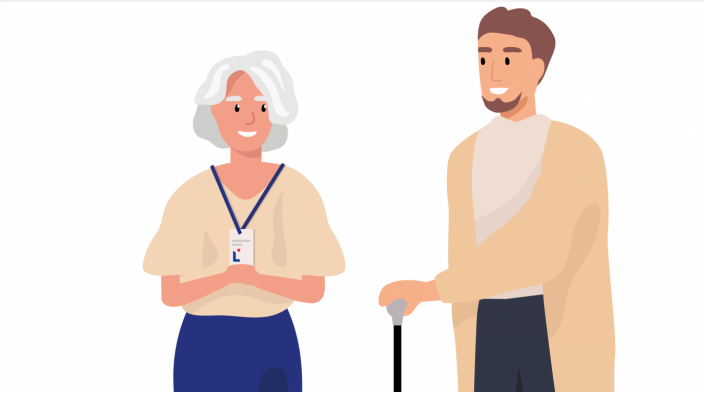 A former army veteran has praised LiveWest after its support helped him overcome homelessness and health issues to get himself back on his feet.

Frank, from St Ives in Cornwall, joined the military in 1974 aged 16 but has faced a number of obstacles since leaving the forces.

He suffered from PTSD which was made worse by anxiety and financial pressures.

Frank said: “A lady from LiveWest housing association was a tremendous help and was really on my case.

“It was great to talk to somebody and have a moan as they were ready to listen to me and help me or at least give me some advice. It made things a lot clearer for me as I was really going through a challenging time.”

Frank, who moved to Cornwall in 1995, has struggled with his mobility and has used a walking frame for quite some time, although he is currently on the waiting list for a spinal operation.

Frank was homeless and was supported by New Connexions to find a property.  He moved into a Penwith Housing Association property.

Then quite a while after this, his circumstances changed and after struggling to find any accommodation again, Frank was supported by LiveWest to move into a bed and breakfast.

But his mail started to build up which included bills and as he didn’t have anywhere to call home, Frank was not sure where to turn.

Frank, in his 60s, said: “Another man also helped me from LiveWest a few years ago. Because I used to ignore mail and he used to come and visit every week, as he would see the pile of mail and tell me I really need to answer it.

“He’d help me with forms because I didn’t really care, and I was losing the will to live where I was ignoring things, so he supported me tremendously.

“Then things kind of moved on from there. I was offered this flat in St Ives and I’ve been here ever since.”

Although things seem to be improving for Frank for a while, he started ignoring his housing officer for quite some time.

Franks’ health was suffering due to his long-term conditions, and he was struggling financially due to being on the lowest income benefits. It meant he was unable to buy furniture and other essential items.

In June 2020, after realising the extent of the situation, our Tenancy Sustainment team stepped in to see if they could help him with some improvements.

Frank added: “I live at the top of a hill at one of the highest points in St Ives. So, it’s very ironic as I stared isolating again which I’m very good at.

“But the person from the Tenancy Sustainment team at LiveWest helped me tremendously, she ensured I got the benefits I was entitled to and really fought for me.

“I’ve been able to put that towards redecoration and refurbishment which has completely improved things for me.

“I’ve used the money wisely and not spent it on alcohol or other things I shouldn’t have which the people supporting me are pleased with. I’ve bought new clothes and shoes and re-carpeted as well as revamped some things in the kitchen.

“I would like to thank LiveWest as without those people helping me, we probably wouldn’t be talking.”

We joined the event in Bristol to support Service Leavers in finding their next career opportunity. We were excited to participate in a recruitment opportunity for the ex-military, which was held b...

We are playing a key role in tackling food waste after piloting a new community project designed to support its residents at a time of spiraling costs. LiveWest has been taking part in some communi...