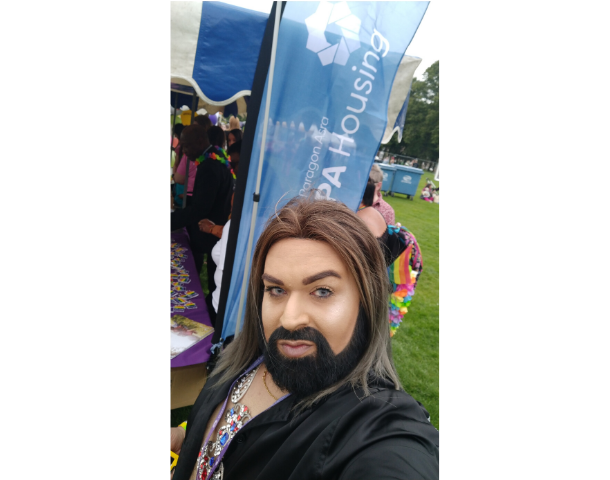 Raj Sharma is the Resident Involvement Coordinator at PA Housing for the midlands and London and this month is running various initiatives within PA Housing to educate people on the LGBTQ+ community.

Growing up in Long Eaton Derbyshire, in a small town, Rajesh’s family were the only Asian household on their street.

“In all honesty being brown and gay I was fighting against the stream. It was a little bit weird growing up but there was nothing racial. Being gay was a different story. My grandma doesn’t really know what gay is. Cousins, aunties and uncles had a few issues, but my mum is a very strong woman and put them straight so I feel like I’ve been protected in that way,” said Raj.

Raj has worked for PA Housing for 11 years and during that time has undergone various trainings to develop his career.

“PA have always been so supportive in trying to develop people and trying to pull out the brilliance from everybody that works here. We’ve done huge amounts around LGBTQ+ and diversity including training around being mindful,” said Raj.

After leaving his previous role, Raj was going for an interview at PA Housing and was advised to tone down his personality.

“I said tone what down? And I didn’t. I was unashamedly me and I’m here 11 years on. Because of my personality I was invited to Westminster to talk on behalf of PA and I’ve been invited back which is quite a big thing. This is why I think, at PA, discrimination isn’t even part of our vocabulary,” said Raj.

As a result of the impactful work Raj has done in the LGBTQ+ and other diverse communities, since joining PA Housing, he was invited to the equality and diversity awards where he was asked to give out an award.

Raj has also taken the working wellbeing group, another inclusive initiative at PA Housing, out to residents.

“The Wellbeing group is about physical and sensory disabilities and how we can sign post to other services and what we can do change people’s lives. If you can have a positive impact on somebody, then, why wouldn’t you?” said Raj.

At PA Housing, they have an events calendar to celebrate the different cultural events throughout the year and Raj runs the Diwali celebrations.

“Our chief exec Dilip is extremely supportive and it makes its way down and that’s the most important thing,” said Raj.

Raj has always known he was gay and for him, LGBTQ+ history month is about education.

“LGBTQ+ has been around since day dot. It’s not new, it’s not something that is a choice, it’s how we are. For me, I wouldn’t ask anybody to walk around in a rainbow t-shirt but to celebrate it, understand and accept it, that’s enough of a celebration as it is,” said Raj.

For LGBTQ+ History month Raj is leading on activities and discussions across the company by creating content to put out across their intranet and social media as well as organising events.

“I find it quite difficult to talk about me but it’s different when it comes to what I represent. I talk for the people that aren’t comfortable,” said Raj.

The first week he focused on LGBTQ+ education, the second on domestic violence within the community and the third around pop culture. For the fourth week, Rajesh is organising iconic film screenings at his offices.

“The films are to show different elements of our culture and the community. Each week I’ve also approached and interviewed people on their coming out stories,” said Raj.

When asked what he would say to a young member of the LGBTQ+ community Raj said:

“I would say be yourself. You don’t need anyone’s acceptance apart from yourself. If you have that you can do anything you want. The world is your oyster just try to be yourself and have integrity. There’s a time and a place to be dancing but always be you and be unique and show others what you bring to the table.

“You could be bright blue with pink spots. It doesn’t matter who you are or what you believe in. Everybody has a strength.”

Today we talked to Jasmine, and her 16-month-old daughter, Autumn, via Zoom and found out what it's been like to work at home with two young children and a puppy. We also discuss the stereotyping of s...

As we continue our month-long series of articles featuring members of the PA Housing team, CRM Analyst Bicram Athwal joins us via Zoom to talk about his day job, and how his recent experiences have gi...

Impact of COVID-19 on LGBT Communities in the UK

Health Implications There is still a great deal that is not known about COVID-19, including exactly how it is spread and what the risk factors are. Additionally, there is no robust evidence to demon...

For everyday inclusion month VERCIDA recently spoke with Allison Burgess who is the Supported Agency Services Co-Ordinator at PA Housing. Allison wanted to share with us some of her personal and care...