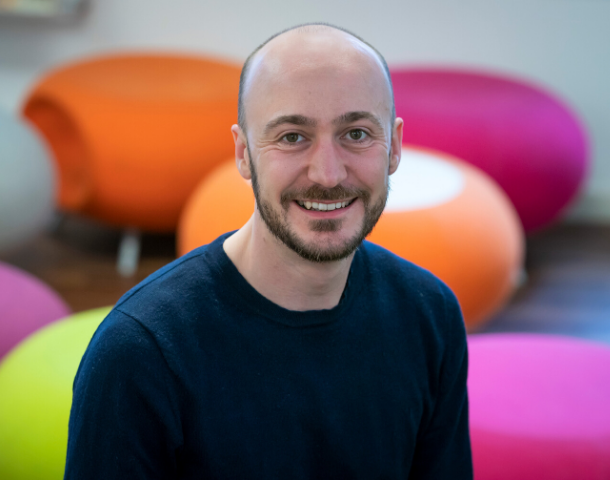 Alastair Mills is a business development and sales manager at Siemens where he develops future markets and projects within offshore wind and grid integration.

Alastair grew up in the Wirral in West Kirby a seaside town near Liverpool, Chester and Wales.

“Growing in up in a boy’s school and being a lover of music and playing piano, there was a suggestion I might’ve been gay. I was a bit different to everybody else.

“I suppose the bulk of the feeling of isolation you get isn’t because of direct discrimination, people weren’t saying being gay is wrong, we never had that thinking within the community, but there was a lack of gay roles models I could identify with. I thought whether it might have been a phase,” said Alastair.

Alastair moved to Manchester for university where he achieved his master’s in electrical engineering and electronics. He is now also a member of the chartered institute of sales management and still plays the cello and piano.

“There was an emotional and family connection to Manchester and I liked the university and what it offered. There was some semblance of an LGBT community which drew me. I’d luckily been able to see Manchester at the weekends and see the gay village,” said Alistair.

Throughout his 11-year career at Siemens, Alistair’s role has developed through new positions and through a vast array of training schemes within the company. Recently this has included training on diversity, inclusion and unconscious bias.

“Unconscious bias training was first rolled out to management and it’s been very powerful for setting the tone and idea that we need people to think widely and outside of the box. It has a measured impact and I’m seeing employees engage and focus on diversity and inclusion,” said Alastair.

Through the early stages of his career, Alastair was aware that his sexuality was being used against him but has not experienced any direct discrimination in the last 11 years.

The work Alistair had done within the LGBTQ+ network at Siemens gave him the confidence to his apply for RAHM’s leadership programme. Having achieved a place on the programme, Alistair went on to achieve a spot in the top ten.

“The network we formed and the confidence I have grown allowed me to apply for the programme. The workshop changed me quite dramatically in terms of how I see things. It gave me more conviction in what I can contribute,” said Alistair.

A former CEO and business leader at Siemens originally created the spark for an LGBT network for employees.

“He became a role model for talking to someone else who has a shared living experience,” said Alistair.

As well as the LGBT network ‘Spark’, Siemens offer flexible and home working options and a women in leadership programme, amongst other inclusive initiatives.

“If there is discrimination in one sector there is also discrimination on gender, race etc. and we’re starting to see the formation of UK employee networks who are challenging this. One of the first, smaller initiatives was Spark, the LGBTQ network, and what it has done is affect a number of people around the company to engage in a community they feel passionate about. It’s not just LGBT members but also allies,” said Alistair.

Spark is not just a network for LGBT members, but anyone that feels passionately about eradicating workplace discrimination and promoting an inclusive culture for the community.

“A lovely example is that some of the work done in Manchester inspired others to engage under their own wings – leading to diversity symbols being on the traffic light filters across the country.. By seeing people do other things in the company, from those groups and networks, that builds other people in the community and creates something diverse which achieves so much more. Not necessarily an initiative, but a trend we’re seeing in the company.

“It’s giving people a series of vehicles and mediums which is creating quite a movement. Those networks work and inspire ideas, and initiatives come out of them which supports everybody,” said Alistair.

Alistair has developed his career and focus on international markets, partly to seek out diversity in the people he works with.

“I naturally navigate towards diverse people because you can achieve so much more. I’m absolutely convinced by it. We would have a more diverse workforce by definition if we were all treated equally,” said Alistair.

People can celebrate LGBT history month in a number of ways.

“It’s not about being seen to wave the rainbow flag for me or most people in the community.  Even if it’s just spending ten or 15 minutes in that month. All you’ve got to do is pick up your phone, research, read and understand what it is that community faces and equally the history and what’s going on today.  Engage and Discuss.”

“I would say to a young member of the LGBT community to be your true self. I would say, yes there are going to be challenges and you’re going to meet some people who do not think or feel the way you do, but the important thing is to engage people in a positive way,” said Alistair.

The world is constantly changing and we re always thinking about what s next. Can you help us build the technologies and innovations of tomorrow? Join Siemen s women's talent community by registering...

Valerie Todd CBE, HR Director, Siemens UK & Ireland When I was growing up in Derby in the 1970s and 1980s we were surrounded by neighbours who, like my family, came from islands in the Caribbean....

Anyone who knows me will know that I am passionate about diversity and inclusion. As a gay man myself it s something that strikes a real chord with me. Just recently I was interviewed for a piece in...

When I was diagnosed with Multiple Sclerosis (MS) in 2014, I struggled to see myself working at all in the future and I thought my strongman ambitions were over. Just over six years later, I can say t...