Meet Kevin (he / him), a document controller working in our Winnersh office in the UK. who identifies as a cisgender gay man – or, as he explains in the video below – a unicorn, “a mythical beast that is gorgeous and stands on its own”.

Sadly, Kevin wasn’t always a unicorn. Brought up in a painful, homophobic atmosphere in rural England, he struggled to accept and understand his identity, eventually running away from home when the pressure and despair became too much.

Aged 14, Kevin fled to London with nothing more than a bag of belongings, a wallet full of small change and his teddy bear. He was forced to sleep on the streets, was robbed of his belongings and quickly found out that as a teenage boy with no money or friends he was unlikely to survive in the big city. 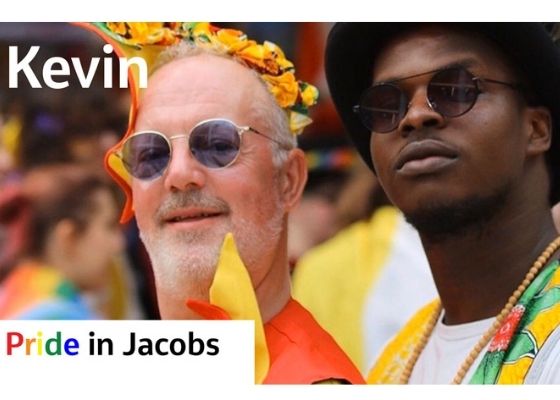 At his lowest ebb, Kevin was rescued by an incredible group of black LGBT youths who helped get him off the street. They were The House of Perpetual Hope, a collective of gay black men and trans women who lived in a commune and styled themselves as a family “House” as part of the Ballroom culture of the 1980s.

For the first time in his life, Kevin had a family who didn’t just accept him but reminded him daily of how beautiful, how fabulous and how special he was. Kevin became “Babybird Hope” and, slowly but surely, began to spread his wings for the first time. Although he was a “white boy” from the countryside and they were black men and women from Brazil and Africa, they were his brothers and sisters and they lived together for years.

While Kevin and the House of Perpetual Hope thrived as a family, it’s important to note that this was against the backdrop of both the HIV AIDS crisis and a hostile political situation in the U.K. during the 1980s. Britain’s Conservative Government – headed by the incredibly divisive Margaret Thatcher – sought to dispossess LGBT communities, actively repealing gay rights and introducing toxic legislation like the Section 28 clause that banned schools from teaching children about LGBT people.

In Thatcher’s words, no children should be taught “that they have an unalienable right to be gay”. This homophobia was backed by many popular newspapers at the time, who portrayed HIV as a “gay plague”, spread damaging misinformation (such as the myth that straight people could be infected with HIV by sitting on a toilet seat or holding hands with a gay person) and portrayed gay and lesbian people as “diseased vermin” and child abusers.

If the climate of homophobia wasn’t already enough to deal with, over the next ten years Kevin would lose all the members of his family to AIDS – a heart-rending and unfortunately all-too-familiar story that is shared by thousands of gay men who were alive at the time. And yet, nevertheless, Kevin continued to live his life, committing through his pain and loss to keep the memory of his brothers and sisters Mamma Hollywood, Steph, Tez, Twinks and Susi alive.

Thanks to our LGBT+ network, Prism, the House of Perpetual Hope lives on at Jacobs with Kevin as the leader. He’s an incredible mentor and supporter of our young LGBT+ colleagues and is changing lives on a daily basis through his work with the Terrence Higgins Trust, the UK’s leading LGBT, HIV and sexual health charity.

Find out more about Kevin’s story in the video below.

June is one of the highlights in #OurJacobs calendar. It’s an opportunity to celebrate the progress we’ve made, amplify the voices of our incredible LGBTQIA+  family, and reaffirm our commitment to...

Sarah Shanahan, Director of Operations at Jacobs tells us about her career in a traditionally male dominated world

The tale of an ambitious young geologist, a blurry-eyed Project Manager mum of two wild boys, and an empowered Director of Operations     The question is: how do you define a satisfying career? I...

This Earth Day we’re launching our brand-new Climate Action Plan, two years after the release of our first plan. We’ve made significant progress in helping to preserve the planet for future generation...

Jacobs in collaboration with global mental health professionals, has developed One Million Lives  a free mental health check-in tool to enhance users' understanding of their current state of mind and...