Today is International Day against Homophobia, Transphobia and Biphobia, which has been celebrated on the 17th May since its creation in 2004. The day aims to draw the attention of policymakers, opinion leaders, social movements, the public and the media to the violence and discrimination faced by LGBT+ people all over the world.

It has become one of the most important days for LGBT+ people worldwide and is now celebrated in more than 130 countries, including 37 where same-sex acts are illegal. Thousands of events take place across these countries and unite LGBT+ people and allies in support and recognition of human rights for all, irrespective of sexual orientation or gender identity or expression.

The date of 17th May is significant as it was this day in 1990 when the World Health Organisation declassified homosexuality as a mental disorder. When first created in 2004, the day was known as “International Day against Homophobia” or “I.DA.HO”. In 2009, Transphobia was added to recognise the very different issues that arise from sexual orientation and gender expression. The current title, “International Day against Homophobia, Transphobia and Biphobia” was introduced in 2015 to acknowledge the issues experienced by bisexual people, which has been transformed into the popular acronym, “IDAHOBIT”. 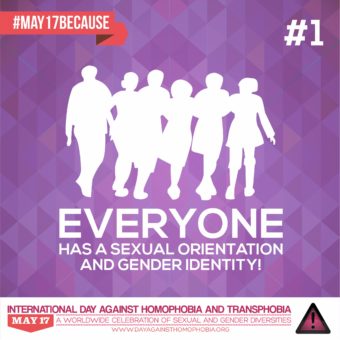 What activists say about the Day

“The Day is not dragged down by a Northern or Western identity and seen as somewhat neutral, without a political agenda that is owned by one geopolitical interest. It has sidestepped the geopolitics” (Botswana)

”There’s very little coverage about homosexuality or HIV/AIDS in Egypt, even negative. But authorities cannot censor international coverage of IDAHOT by the BBC or Al Arabiya. Some forms of visibility have to come from outside.” (Egypt)

“The regularity and predictability of the Day allow organizations to plan their mobilisation even when the topic is not ‘hot’. Also, by centring the debates on the ‘phobia’, it allows the paradigm shift that the problem is not the diversity in human sexualities and gender expressions, but the irrational rejection they provoke in some people.” (Indonesia)

“Opposing homo/transphobia can form a common denominator for a large spectrum of stakeholders. Hardly anyone, including religious authorities, will want to appear to support homophobia and transphobia, even if they refuse to support any concrete progressive measure to fight them.” (France)

“The wide official recognition which the Day gets, allows organisations to leverage policy support. We used the recognition that the Day gets from Western governments to get all their Embassies to raise the rainbow flag on their building on May 17th every year.” (Sri Lanka)

“The fact that the Day is officially recognised by almost 20 States, countless local authorities and several international institutions like the EU provides a strong argument for the legitimacy of our action in hostile contexts.” (Albania)

“The fact that we know thousands of other activists are taking action on the same day is an incredible booster of our self-confidence. We actually see that the global community somehow exists” (Cambodia).

“The International Day Against Homophobia and Transphobia represents a moment when different groups coexist and come together under a same agenda, which gives a necessary complement to more specific dates that allow particular visibilities and empowerments, for example of Trans people.” (Brazil)

“May 17 represents the only annual moment when we work together with organizations from other countries, on the same issues. We have other moments to talk about doing something, but May 17 is the moment when we actually do it” (China)

“The IDAHOT is a unique opportunity to see what happens elsewhere, to learn from what others do, to launch joint actions with others who work in similar contexts– it breaks the feeling of isolation we so often experience” (Algeria)

On 17th May every year, people in over 130 countries around the world mark IDAHOBIT the International Day Against Homophobia, Transphobia and Biphobia to celebrate diversity and raise awareness of...