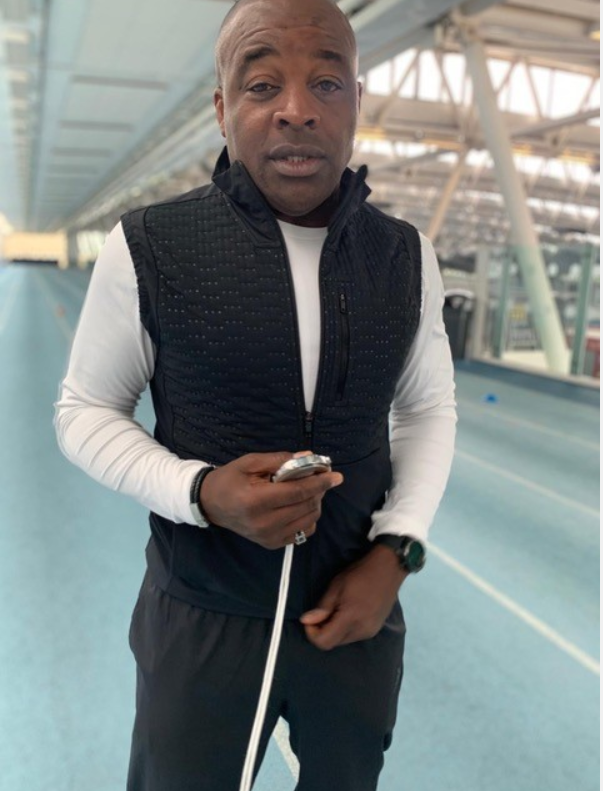 What is your athletics background?

I was born and brought up in England, at eight I moved with my family to Nigeria and there, I found my love for running. I ran at school sports days and realised I was a little quicker than most.

In 1989, at age 17, I joined Newham and Essex Beagles where I trained with Bob Mortimer, who coached Daley Thompson, amongst others. I started training three times a week as a sprinter.

In 1991, I moved to Manchester for my first degree where I trained with Earl Tullock, a British International in his days as an athlete. The group included the likes Alan Condon, Darren Campbell & Owusu Dako. I was only there for a couple of years before moving to Staffordshire in Stoke to study sports science and anatomy. Although I was training with Ron Roddan and Linford Christie, the late, great John Daley looked after my sessions in Stoke.

As an athlete, I won a medal at the World Students, made numerous national finals and BUCS. I never got a senior international, but I was satisfied with my little achievements.

How did you get into coaching?

I didn’t really plan on becoming a coach, but I am a very inquisitive person that sought information to be better. I am very analytical and a bit of an anorak for sporting history, statistics, current and past performance so end up reading an awful lot. Although Stoke was a very small university it had a very good library of exercise & sports science journals so I started reading a lot in my spare time.

I knew there was a gap between what I was doing and what others were doing. After university and over the next 3 years, I trained in America & North America experiencing three different coaches and their set-ups. I learnt a lot from the different methodologies, coaching systems, and different coaches.

In 2000, during my final year of athletics, I trained with Tony Hadley over the 400m while doing my Masters in Birmingham. Ted King (former National LJ coach) asked if I could teach a group of kids in Birmingham once a month. This developed into a weekly training group at Loughborough TiD (Talent Identification Programme), athletes coming through this group included Natalie Jowett, Nigel Levine and Alex Nelson but they weren’t ‘my’ athletes as I just helped them and their individual coaches once a week. It became very successful and people around the country adopted the TiD concept.

In the winter of 2003, I, along with the great late Lloyd Cowan, Kevin Parks and Alf Vickers, formed a training group called KALM, that was my first formal coaching position. I oversaw the sprints.

I set up my own group the following year with athletes including Jeanette Kwakye, Rikki Fifton, Dwayne Grant and Jon Barber to name a few. Although I had trained or studied under the last four 100m Olympic champions till 2000 and had a lot of ideas in my head, I had to formalise it and develop a coaching philosophy and do my coaching qualifications. I have been coaching ever since.

What’s your coaching philosophy (what underpins your approach?)

My approach is very scientific and extremely technical. I believe technical proficiency is the embodiment of movement. Until you make technical changes, you can’t improve – you have to move in the right way to generate the right force. I try to condition athletes to run both 100m and 200m and be able to run fast all year round BUT doing it when it matters e.g. Champs. I believe in life we all need a structured environment within good boundaries and discipline in order to do what we do. Every individual craves discipline.

Why do you coach – what do you love most?  What keeps you motivated?

I love helping people. I like working on a project from beginning to the end to get people better. I like developing individuals – a better individual will apply themselves to what you are telling them to do.

What’s your biggest achievement or most memorable moment as a coach?

Moments, there have been a few! For example, Jeannette Kwakye reaching top five in the Olympics, a British record and a silver medal in the world indoors. Or, Adam Gemili winning the World Junior Championships 100m within six months of joining us and the following year achieving top five at the World Championships 200m running sub-20s.

Then, Ashleigh Nelson getting a European 100m medal with the last six weeks being challenging healthwise.

Not discounting more than eight national champions over the years. All these athletes came to us as juniors and getting them to be successful and progress to the top five on the world is a huge achievement for myself and our support staff over the years, that we are proud of.

What are your aspirations for 2022 onward?

Keeping my athletes developing and moving to fully fledged international athletes and continuous progression. Currently, Tommy Ramdhan, Romel Glave are promising prospects that are ready to move into the senior competitive senior world.

I also enjoy doing my team management roles with British Athletics having led the GB under 23s at the last three European Championships. The age group champs have a key role to play in bridging that gap between juniors and into the seniors world. It is important we as nation get the journey right for our juniors athletes into successful competitive senior athletes. It is important to really make the time with the athletes at that championships count.