Gender diversity of data scientists has been cited as an issue by many sources. According to The Burch Works Study of Data Scientists, only 15% of data scientists are female and the percentage of females in data scientist manager roles (<10%) is much less than that of early professionals (> 20%). This data is consistent with studies from other organizations. Although such statistics may lead one to believe that a skills gap is wholly to blame, we recognize there is more at play. 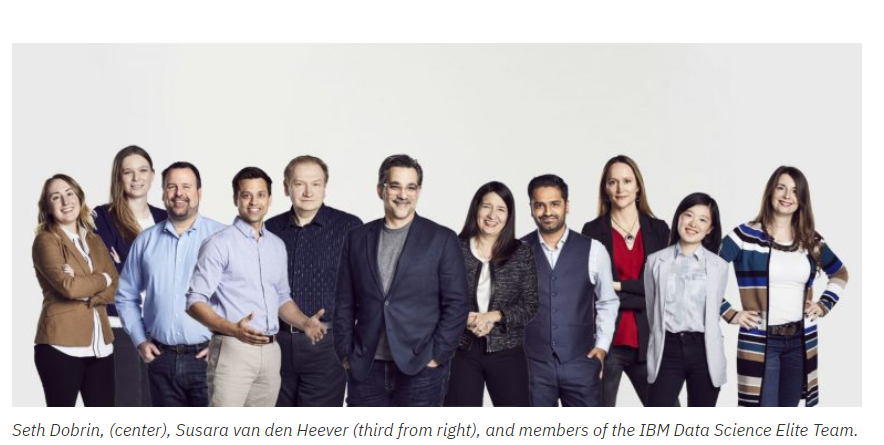 There is ample evidence that shows that women are graduating in vast numbers with scientific and technical degrees. In 2012, 42% of European PhDs in science, maths, and computing, were awarded to women. In the U.S. in 2019, women comprised 43% of the workforce of scientists and engineers. Additionally, there are female-focused data science groups that have tens of thousands of participants. For example, the Global Women in Data Science (WiDS) Conference, attracts more than 100,000 participants each year.

Against this backdrop, the question then becomes, how can we fix this?

The Business Value of Diversity

How to Attain It

To fix the diversity problem each and every one of us has to look deep inside ourselves and fix our own biases, and then put in place concrete action plans to find and hire diverse talent. These plans must encompass the entire talent acquisition pipeline.

But first a personal story from Seth: “In 2013 I set out to hire a very, very scarce subset of data scientist. Not only was I having trouble finding qualified candidates but there was zero diversity in the candidate pool. I was speaking with my wife about it and she brought up a good point that my job description was essentially a wish list: I want someone with these 25 ‘things.’ She said the things on the list were not all skills that were necessarily required for success. We worked together to convert the description into a menu: 3 of these, 2 of those, 1 of these. The results, while anecdotal, were immediate. The pool of qualified candidates doubled entirely by adding women, people of color and other underrepresented groups. In the end I hired a very qualified candidate who also happened to be Latino, complimenting my team with both new skills and racial diversity. This helped set my frame of mind in my next mission and fundamentally changed my approach to hiring moving forward.”

Beginning in early 2018 we set out to create the IBM Data Science Elite Team with a goal of hiring about 100 data scientists. This group would be a client-facing organization dedicated to walking customers through the assessment and planning of data science projects as they mapped out their individual roads to AI. Hiring was to be done in 3 sprints of 3 months, each spread over the course of a year. An additional goal we set for the leaders of this team, was to hire a highly skilled and diverse team. Ultimately, we wanted the team to be comprised of the most qualified candidates, including women and other diverse candidates.

Our approach was essentially to reevaluate the entire hiring cycle, from writing the job descriptions to making the candidate an offer. Here’s how we outlined the approach:

By following this process, we have built a global team with diversity that is much higher than is seen on the market. This team is highly skilled and has worked closely in small groups with more than 100 different IBM clients. Our anecdotal evidence of the team’s exceptional work typically comes in the form of personal exclamations, such as, ‘How did you put this team together? They are awesome!’ Not surprisingly, such accolades are generally followed by comments about the level of diversity. One client expressed their joy in seeing that our diversity-focused approach is breaking the age-old corporate culture of “I know a guy” – we are hiring and advancing people because of their talent, not because of who they might know.

A personal story from Susara, who led the hiring of the European IBM Data Science Elite team: “Seth gave me the mission to build a diverse top-talent Data and AI team from the ground up. I was fortunate to work with a boss and mentor who provided training to recognize and address bias, who put in place a diversity-focused hiring practice, and who motivated me and my peers to build a diverse top talent team. Today my team of 25 consists of 43% women, we have 18 different nationalities, and we speak 25 different languages!”

While we believe we can be more diverse, we are very close. Worldwide, we have female representation that is about 75% higher than the norm. We are roughly 20% PhD’s, 60% Masters’ and 20% Bachelors’ graduates. We are also proud of the racial and LGBTQ diversity we have been able to build within our teams but also recognize that the work of diversity and inclusion is perpetual for teams who strive to do it well.

Our goal was to create a diverse team of highly technical and highly talented individuals, not only because it’s the right thing to do, but because it drives better business outcomes. There’s more to be done, and we’re constantly working on improvements. But we’re thrilled with the results thus far.

Find out more about working at IBM

Why Charlotte loves her part-time career with Travis Perkins Charlotte is a Counter Sales Assistant at our Travis Perkins branch in Woodley and she’s coming up to her three-year anniversary with the...

Skanska UK has participated in a ground-breaking programme to tackle the under-representation of young Black men in construction.     The six-month programme coordinated by the Greater London Aut...

Paris, January 26, 2022 Capgemini today announced that it is one of 418 companies across 45 countries and regions to be listed in the 2022 Bloomberg Gender-Equality Index (GEI), a modified market ca...