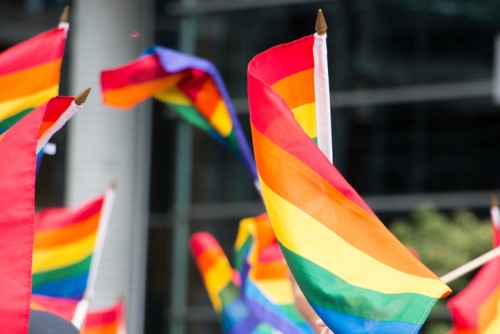 Emma Robertson talks to Vercida about her Aon journey and the importance of visible LGBT+ role models within STEM.

“You can’t be what you can’t see”: the words of American Activist Marian Wright Edelman are often quoted in relation to the dearth of women working in STEM, and with women underrepresented at all levels in the sector - women make up just 14% of the STEM workforce in the UK – the visibility of those in STEM roles is vital in encouraging young women and people of minority genders to see that they too can occupy that space.

Visible, diverse role models at all levels of an organisation can inspire colleagues and create an inclusive environment, where people feel they can be their authentic selves. Aon feature in the Stonewall Top 100 Index of UK Employers 2020, in part due to the network of visible LGBT Role Models and Allies established by Aon Pride Alliance, an international network for LGBT+ colleagues and allies with local chapters.

We spoke to Emma Robertson, Associate in the Intelligence department, Aon Cyber Solutions to find out more about her experiences. Although relatively new to the organisation, Emma has already established herself as a role model, both as a woman in STEM and as an LGBT Role Model for Aon Pride Alliance. She was featured in Aon’s ‘Connecting Colleagues Speaker Series’, discussing both of these aspects of her working life and was interviewed as a role model for the social enterprise STEMettes, which promotes careers in STEM to young women and people of minority genders. She was also a delegate in DXC Technology’s Digital Minds 2020.

Emma began by explaining how she found her way into working in cyber security from a background in languages. “I studied Arabic at university and didn’t really know what I wanted to do beyond that other than to use Arabic in some way and that’s how I ended up at Stroz Friedberg, in their Due Diligence and Strategic Research Department in the Middle East and North Africa team. Just four months in, they announced that the department was shutting down. I had the opportunity to stay and move into a different department within Aon, which is where I am now.”

Although Emma did not have a background in cyber, she had many transferrable skills such as report writing, investigative skills and she continues to develop her technical knowledge and understanding of the cyber world. Coming from a non-STEM background has been no barrier to Emma who along with other members of her team has been offered the opportunity to gain relevant certification in cyber skills. She completed the Foundation Certificate in Cyber Security last year and will be working towards CREST  (The Council for Registered Ethical Security Testers) certification this year.

Talking about her experiences as a woman working in cyber, she said: “I’ve not really had to think about it [gender], maybe that’s because my team are predominantly women – and so I’ve not experienced any prejudice. We also have a lot of women in senior roles at Aon. I think that’s a great thing, and perhaps shows that the world is changing and that for people my age, we don’t necessarily see gender as a barrier.”

We asked Emma why she thinks it’s important to get more women and minority women into STEM roles.

“It’s so important to have visible role models, showing the next generation that it’s a level playing field and that it’s open to all. Diversity is key, not just gender diversity, but diversity in every way. I think if we’re able to have a more diverse workforce it brings different insights and life experience.”

Last year, Emma featured as a role model for the STEMettes ‘Explore Series’ to inspire more girls and young people of minority genders to consider careers in STEM. She said: “I definitely had that feeling of imposter syndrome, given that I’m not from a classic STEM background. But I realised that I can be a valuable role model for young people and for young women and non-binary people in particular. My story shows that there’s another route into STEM careers - certainly like me lots of people don’t know that these jobs even exist.”

Visibility is vital to fostering an inclusive culture within the workplace and LGBT+ role models like Emma play a vital role. Emma explains:

“Visibility is so important, we have Pride Alliance lanyards, Pride Alliance branding, for example within the building and now crucially on the intranet. But I’d say ultimately the most important thing is the story sharing and those role models being visible and vocal; that’s certainly something that Aon is doing.”

Emma talked about LGBT+ people that are closeted in the workplace: “Having visible role models, visible resource groups and networks might help people to realise that there are other people like them out there, that support is there, that they can be their authentic selves, they can be proud of who they are.”

At Aon, LGBT+ role models are joined by visible LGBT+ Allies. Emma said: “Allyship is so important. It’s great to have the network, but it doesn’t help if those groups remain exclusive – by having Allies involved, it broadens it out – not just for Pride Alliance or LGBT+ issues but in all diverse networks. A good ally is someone who’s vocal and visible about their allyship. Having allies on our committee is invaluable because that enables it to become a conversation that’s open to everybody and it helps to progress LGBT+ issues. I hope in the future we won’t need those groups, or labels – because it will be a non-issue.”

Emma was able to share her experience as an LGBT role model as well as her work as a woman in STEM as part of the virtual ‘Connecting Colleagues Series’ that Aon launched in response to the COVID-19 pandemic and first national lockdown:

“One of the great things that’s come out of this situation that we find ourselves in is in some ways people are more connected and perhaps more open with their struggles. It’s been valuable having people like myself in more junior roles to share our experiences with senior colleagues and vice versa. I spoke about Pride Alliance and a bit of my story, my coming out and understanding my sexuality. I also spoke about my Dad who is in a care home and has Multiple Sclerosis and has been very unwell for a number of years now, so that’s been a big part of mine and my family’s life for a long time, particularly in the last few years. And obviously my situation, like that for many other people, has been affected by the current restrictions, so I was able to share a little bit about that, which I think was valuable for other people perhaps going through different things during the pandemic. Of course I also talked about my cyber stories and things that a lot of people didn’t know about our department and what we do.”

Initiatives like this, which increase the visibility of role models such as Emma from all levels of an organisation have the ability to reach beyond networking and BRG groups to colleagues who may not yet be engaged with LGBT+ or gender issues. Emma explains: “It was really a powerful, connecting experience for people. Just to hear those experiences has been so valuable.”

How Aon prepared for Pride in 2021

Aon participating in London Pride 2019 Pride Month is usually celebrated with parades and marches, but with social distancing still in place, things will be different for a second year. We spoke to...

Celebrating Pride will be different for the second year in a row due to the COVID-19 pandemic. James and Iain from the UK Pride Alliance at Aon share with us their experience and suggestions for celeb...