Serving Met police officers from a range of diverse backgrounds and circumstances are sharing their personal stories in an effort to encourage more Black, Asian and Multiple Ethnic Heritage people to join the Met as a police constable or a detective.

From Wednesday, 7 July, a Black and gay police officer and a senior detective, who is also a working mother, are amongst a number of officers who will tell the public that ‘Now More Than Ever’ is the time to join the Met Police. 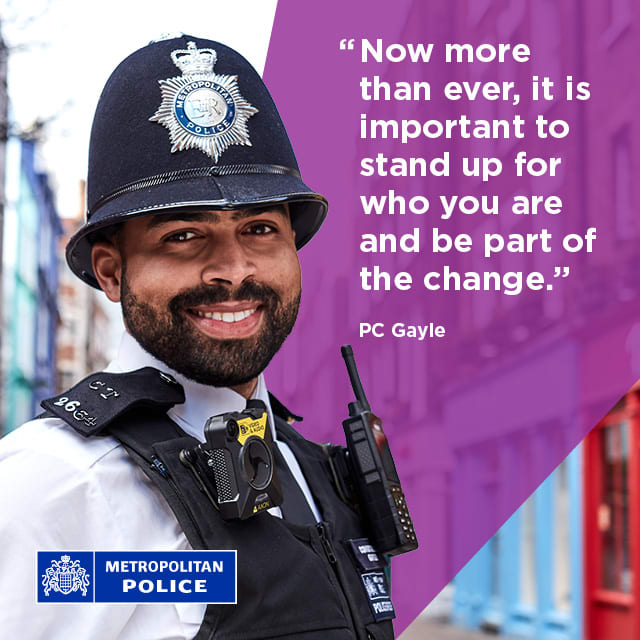 By sharing their personal stories – in their own words – these officers and this campaign will aim to inspire others, particularly those from Black, Asian and Multiple Ethnic Heritage communities, and women, to consider an exciting and rewarding career policing London as a uniformed constable or a detective.

Each story is a celebration of the diversity in the Met and illustrates just how the Met is changing to reflect London.

This campaign is the latest in recruitment efforts which follow bold steps announced by the Met earlier this year to improve further the trust and confidence of communities – particularly Black communities – and the recruitment aspirations announced by Commissioner Cressida Dick, that Black, Asian and Multiple Ethnic Heritage officers will make up 40% of all new officers recruited from April 2022.

Research conducted by the Met ahead of the campaign found that the fear of disapproval from family and friends, worry of perceived prejudice within the force; and for women in particular, the perception that policing is an inflexible job for mums, were just some of the reasons cited by women and potential applicants from Black, Asian and Multiple Ethnic Heritage communities for not applying to join.

At the heart of the campaign is the recognition of these challenges but also the stories of the real-life role models already thriving in the Met.

He said: “I believe that you can’t be what you can’t see. I hope to inspire young Black people to join the Met.

“Being a Black, gay police officer hasn’t always been easy, but across the Met the right conversations are being had by the right people and equality is getting the attention it deserves.”

Detective Chief Inspector Heather Pilkington, a busy mother-of-one, is keeping the public safe from the threat of terrorism.

She said: “Now, more than ever, being a police officer is about choosing your own path and realising your potential. When I joined the Met 20 years ago, my friends and family doubted if a woman could make it as an officer. It made me question myself but through my own determination and the Met's support, I was able to prove them wrong and forge a career path for myself, and pave the way for other female officers.”

PC Gayle and DCI Pilkington are among more than 5,000 Black, Asian and Multiple Ethnic Heritage Met officers currently keeping the public and London safe as police officers – 450 of whom joined in the last financial year.

Detective Chief Superintendent Tara McGovern, Head of Recruitment for the Met and also Chair of the Met’s Network of Women, said: “The Met is one of the largest employers in London and with a broad range of roles, from neighbourhoods to firearms.

“We are already an exceptionally attractive employer, with more than 2,400 people joining us in the last financial year alone. We know that in a city like London, reflecting the communities we serve will only make us stronger and better at keeping people safe.

“Our recruitment efforts are also part of the bold steps we are taking to improve the trust and confidence in all communities – particularly Black communities.

“I know there are many more people who want to make a difference, to help people and begin a career in a brilliant organisation, performing an exciting and extremely rewarding role.

“To those people – today – I say, now more than ever is the time to join the Met.”

Find out how to start your career in the Met at www.met.police.uk/careers

Get Involved with Black Inclusion Week!

Right now, Black inclusion in the UK is the subject of many discussions in society, organisations and around family dining tables in a way that it never has been. People across all walks of life are a...