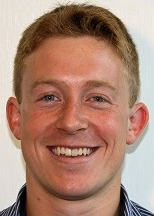 Matt Eglinton, Buddy Network co-ordinator at the Department for Transport talks about the importance of talking, and listening to others.

It will have been over 10 and a half years since I last saw my Dad.

A teacher, not a civil servant but a public servant nonetheless – a man who whilst kind, loving and gentle, had mental health issues that unfortunately were never resolved up until the day he took his own life.

At the time, I didn’t know that anything was wrong. My parents had separated a couple of years before, with Dad moving out of the family home.

I still had excellent relationships with both of them – occasionally taking advantage of parents communicating less often and knowing exactly where I had been out and what I’d been doing. Normal teenage stuff.

We talked a lot, my Dad and me - mostly about rugby, football, athletics; common interests in sports that we both did, or had played. We talked about my hopes, my aspirations regarding my career (note: I never did become that doctor).

Never once did he reveal his vulnerability and the demons he struggled with to me, and never once did I question him if he really was ‘OK’. Apart from once suffering with a hernia, he was very much ‘I’m all right, Jack.’

I later, after the funeral, found out the times that he’d attempted ending it before; I had been shielded of these awful events by both him and the very few who knew.

My last memory of him? A really good one.

The days before it happened - driving to university for third year, listening to Springsteen, having generally a great time. He met my friends, and they instantly bonded. We talked a lot that day too, but in hindsight – perhaps not about the right things.

I just wish I’d known more: the benefit of foresight, rather than hindsight would have undoubtedly been valuable. Endowed with this knowledge, would I have tried to stop him? Unquestionably. Would it have helped? I don’t know.

I do, though, wish that I had been able to have supported him fully at his most susceptible and exposed, and tell him that it would be alright and get the help he needed, but I, alas, cannot.

You can make a difference

Being able to support others is one of the reasons why I joined the Buddy Network, and why the Department for Transport is promoting Mental Health Awareness Week. To be able to help, support those who need it, to simply talk issues through can be just the tonic to keep people going, giving them the strength to face up and resolve issues in the most appropriate way.

Small actions, from therapy, to mental health first aid, or merely lending a sympathetic ear can all play a huge part in preventing events unfolding and deteriorating to a point where it all gets too much, where someone feels down and unable to face what life throws at them.

What people do with their lives also affects those closest around them. Like a pebble cast into a tranquil lake – the multiple ripples of an event or life decision spread outwards, radiating from that single point.

Lives can be changed, uplifted, shattered by the decisions of others.

By taking the time to listen, to help those who may be in need of some support or advice, just think of whose worlds you are potentially saving.

World Mental Health Day: why you should always ask twice

This article is written by Mel Collins, Deputy Director of HR Delivery and Strategic Partnering, and a Mental Health Champion at DCMS. In October 2020, DCMS held a mental health awareness week. The t...