On Wednesday 7 March, three Apprentice Award events were held across the Department for Transport (DfT) family as part of National Apprenticeship Week. The events brought together apprentices and their line managers to recognise and celebrate the achievements and the impact apprenticeships have had over the last twelve months.

HR and Estates Director Louise White opened the event and presented the 2018 Apprentice Awards to the winners, in recognition of their exceptional contributions.

“It’s been really inspirational to hear about the brilliant journeys the apprentices have been on and celebrate their successes. Hearing about everyone’s drive to develop has strengthened my resolve to carry on apprenticeships here at the DVLA. Well done to all! 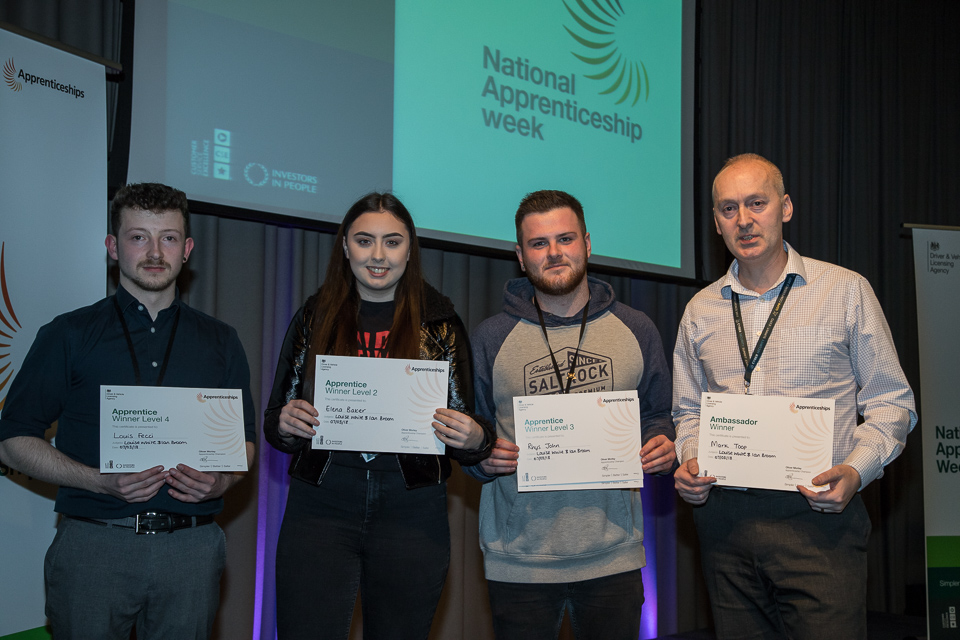 The DVLA celebrated not only the winners, but awarded highly commended individuals who demonstrated the strength and determination along their apprenticeship journey, these were:

Level 3 Apprentice of the Year

Level 4 Apprentice of the Year

Line Manager of the Year

Ambassador of the Year

Cara McMahon, Head of Talent and Capability announced the winners of DVSA’s apprentice of the year, apprentice line manager and ambassador for apprentices awards.

Congratulations to Tom Parkin and Emily Herbert. Tom was awarded the apprentice of the year at DVSA and Emily was named as the winner for both the Line Manager and Ambassador of apprentices for the year.

Adrian Long, Director of People, Communications and Engagement said:
“We received a high number of nominations for the awards and all are deserving of the recognition. The enthusiasm and passion for being an apprentice at DVSA has been evidenced within all of the nominations and I am sure that these nominees will continue to demonstrate their passion for skill development.”

“The applications were a testimony to how inspiring and encouraging Emily is. This is a really positive story. Emily was an apprentice herself, she’s now successful in a team leader role and actively mentoring and supporting current apprentices”.

Department for Transport (DfT)
Nick Joyce presented the awards, highlighting the fresh thinking mind-set that apprentices bring to the department. Nick also praised all of their hard work, reinforcing how their insight and dedication is driving the Department forward now and in future years.

Congratulations and best of luck to all our winners. They now go forward to the ‘DfT Apprenticeship Awards’ to be held in April 2018.

National Apprenticeship Week 2022: reflecting on my experiences as a DIO apprentice A red flag flying to indicate that a Range Danger Area (RDA) is operational one of several familiar sights on t...

It’s National Apprenticeship Week. Back In 1919, we decided which apprentice to hire by the flip of a coin… fast forward to today and, thankfully, apprenticeships at Aviva have changed quite signifi...

National Apprenticeship Week 2022: An expansive variety of opportunities at DIO

National Apprenticeship Week 2022: being a chartered surveyor apprentice at DIO A U.S. Air Force F-35A Lightning II assigned to the 495th Fighter Squadron lands on the flightline at RAF Lakenheath...

Developing a skilled, productive workforce is fundamental to the Northern Powerhouse. According to recent Government data, apprenticeship numbers are now returning to pre-pandemic levels which is go...