Secretary of State for Digital, Culture, Media and Sport, Matt Hancock, brought together organisations from across DCMS sectors to discuss diversity and inclusivity. 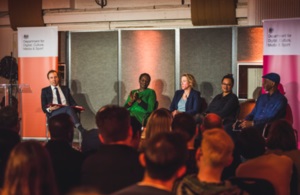 In the first event of its kind, Digital and Culture Secretary Matt Hancock, brought together more than 100 organisations from across the digital, culture, media and sporting worlds to address diversity concerns.

Speaking at the event, Secretary of State for Digital, Culture, Media and Sport Matt Hancock said:

Diversity is not just a moral imperative, it makes good business sense. It’s crucial that these positive intentions are converted into good decisions.

Talent in music, sport, tech, art and design can be found anywhere but unless we look for it everywhere, we all risk losing out. We need to open up opportunities to everyone in this country - because you’ll never serve the nation unless you reflect the nation.

This was an invaluable opportunity to share learning from our successful This Girl Can campaign with representatives from very different industries - each with a common goal to increase diversity. We all have so much to learn from each other as we work to tackle the same big challenges of under-representation in our respective sectors - and so much more to do to. But by working together, we will achieve faster change.

Attendees also heard from Deborah Williams, Executive Director of the Creative Diversity Network. She oversees Project Diamond which tracks levels of diversity in front of and behind the camera of all UK-originated productions on BBC, ITV, Channel 4, Channel 5 and Sky.

It was so pleasing to see representatives from across the entire DCMS portfolio in one space sharing experiences and learning from each other. Matt Hancock showed his passion for diversity and made clear there is no turning back in this agenda.

The Diversity Forum coincides with the publication of the Creative Industries Sector Deal which will see £2 million made available to kickstart an industry-led skills package. This includes a creative careers programme to encourage a more diverse intake of talent and more routes into the creative industries.

We strongly welcome the Secretary of State’s commitment to diversity and inclusion and believe that film, as one of the most accessible art forms, is a vital driver for change.

The BFI actively demonstrates our commitment through what we say and what we do, for example our current BFI Flare: LGBTQ+ Film Festival, the BFI Film Academy or the adoption of BFI Diversity Standards, which have become a game changer for film. The Diversity Standards are a prerequisite to receive BFI National Lottery funding but they are also enthusiastically being adopted by the industry as an essential tool to effect change through challenging recruitment decisions. They show just how determined and open we are as an industry to offer opportunity to everyone.

DCMS have always been a department that embraces flexible working, and, during the COVID-19 pandemic, they adapted efficiently and effectively to remote working.  As we emerge from the pandemic, DC...

What are DCMS doing for Disability History month? #PurpleLightUp

DCMS are proud to be an accredited Disability Confident Leader and are celebrating Disability History Month with a variety of insightful and meaningful events to celebrate disability, or, as referr...

5 Reasons to start your career with the Department for Digital, Culture, Media & Sport

The Department for Digital, Culture, Media and Sport are lucky enough to work on some of the most exciting, positive and important policies impacting the future of the UK - so why not join them? Here...

My Disability Journey - Lisi at DCMS

At DCMS we are committed to promoting opportunities for candidates with disabilities and ensuring their experience working at DCMS is positive - that they feel supported and empowered in spite of any...