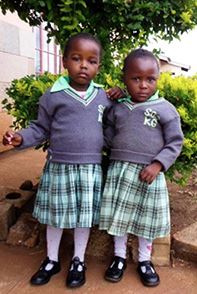 Working with SOS Children’s Villages – Charity of the Year Update

SOS Children’s Villages were our Charity of the Year last year. The charity was chosen by staff vote from a list of four potential charities. We initially chose SOS because what they do – providing education and support to vulnerable children across the world – really resonated with us as an organisation. It also helped that they were both local – based just a couple of buildings down the road from us in Cambridge – and international. Most of our staff are based in the UK but we also have a large network of colleagues in other countries.

When we told SOS that they had been chosen as our Charity of the Year they couldn’t have been more supportive. We went to have lunch with them and talked over all the ways we could potentially help the charity. We wanted to contribute to a specific project so that our staff could see the difference their donations were making and eventually we chose a target of sending 50 children in Chipata, Zambia to school for a year. The target was pretty ambitious but we decided to go for it anyway!

SOS provided us with collection pots, leaflets, badges, balloons and all sorts of other things that we could use in our fundraising. They also came into our Cambridge office a couple of times, once to judge our Halloween Bake Off!

Throughout the year, we held bake sales, craft sales, book sales and more bake sales. We also produced a Charity Christmas card that we sent electronically and the proceeds from that all went to SOS.

One of our staff charity committee members came up with the idea of a walking challenge where people got into teams and counted their steps with a target of collectively walking from Cambridge to Chipata. This raised both money for and awareness of SOS. 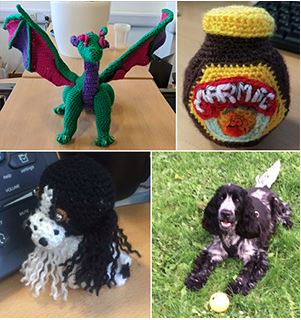 A mysterious crafty person started leaving little crochet creations on people’s desks anonymously. When one of our colleagues received a Clanger, she donated £10 to SOS and mentioned it on our organisation's internal social media platform, Yammer. That was the beginning of something completely unexpected and wonderful. People started making requests for things from the Mystery Crocheter, and the Mystery Crocheter made them in exchange for donations to SOS.

From a Daredevil, to a whale shark, to someone’s dog, the Mystery Crocheter was inundated with requests and always delivered. We also managed to auction off a few creations: a penguin at Christmas, an amazing posable dragon, and a reindeer. And we still don’t know who they are!

By the end of the year, we had surpassed our target. We originally thought that we would raise enough money to send 64 children to school for a year, but we have since found out that our donation was enough to send 119 children in Chipata to school for a year. It would have funded more, but there are only 119 children in the village! The rest of the money went towards materials and uniforms for the children.

We’re really lucky to work on behalf of such a phenomenally generous group of people. Our staff really got behind the fundraising for SOS. Our CEO, Saul Nassé, is also really supportive of what we do which is brilliant. He's pictured below with his Mystery Crocheter pengu 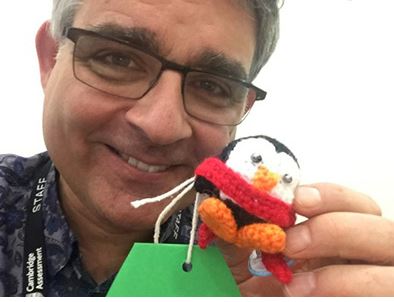 Now that we have finished fundraising for them we will stay in touch and see what more we can do to support them. We’ll let people know about opportunities to fundraise or volunteer for SOS. We have loved working with SOS. The work they do is so important and they are a tiny team making a huge difference. It is a huge privilege to contribute towards something so life-changing for these children. We would recommend working with SOS to any organisation.

You can find out more about the charity's work in Chipata on their website.

Community building through fresh thinking Helping people face the future with confidence. That’s what we always strive to do at Aviva. And it’s what we want to continue to do for causes in the UK....

The health pandemic: how it has unleashed the energy of our people to help our charity partners navigate a virtual world

Looking back at 2020 and how we came together as a team As we complete a year of lockdown, I am reflecting on the significance of 2020 in terms of our enriched relations with our charity partners. It...

Making a difference for boys and men in our community

Martin Perry has worked at The Intellectual Property Office for 17 years and is currently supporting colleagues as a key member of our Facilities Management team. Martin recognised from a young age h...