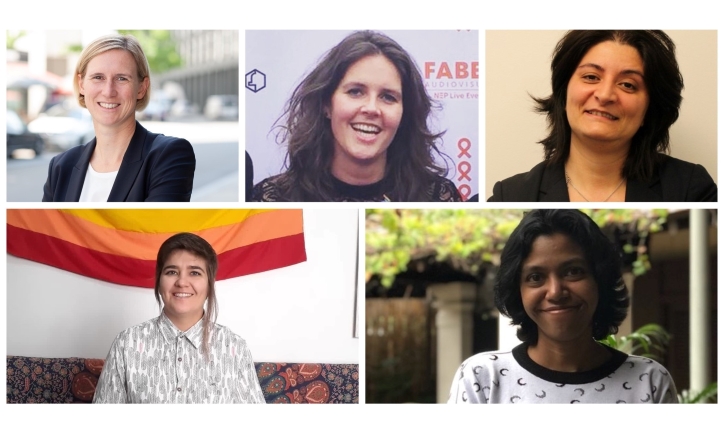 We want to share the stories of five proud members of Accenture’s LGBTI community.

Their examples of struggle and fulfillment—and words to live by—are inspirational reminders of the importance of being our true, authentic selves.

"I found my voice, finally."

“There was a time when my friends and colleagues constantly asked me why I wasn’t interested in getting married,” says Annith Infanta.

“I evaded these questions, as I wasn’t ready to come out. Not yet. My mother still believes that homosexuality is a mental illness. I isolated myself and wanted to be invisible. From being a rather loud person, I became quieter. I relocated to a large city, so I’d get lost in the crowd.

"I found my voice finally, thanks to the unconditional acceptance I received from an ally—my supervisor at Accenture. She was the first person that I came out to. Today, I am happy, visible and doing work that I love.”

"When you speak up, you create a safe environment for people to be themselves."

“I missed the opportunity to live my teens as a lesbian, and I believe this is the case for many of us,” says Luana Monteiro. “As children, we are brought up to believe that being ‘heterosexual’ is the only ‘normal’. So, when we perceive ourselves differently, there is silent self-sabotage to fit the expected pattern.”

Luana started her career at Accenture in 2008 as an analyst. After working in various roles, Luana realized the importance of being visible as a lesbian and doing her part to make the world a more equal, unbiased place.

“Many LGBTI people are shunned by their families and denied jobs after they come out. Advocacy, support and creating a safe environment are incredibly important,” says Luana.

Maartje Scholten, Consultant, Talent and Organization and Inclusion and Diversity Lead, The Netherlands

“Being part of the LGBTI network really helped me to be open and out at work,” says Maartje Scholten.

Maartje was a professional volleyball player when a knee injury shattered her dreams. After this, she earned her Master’s Degree in Business, worked at a startup for a year, traveled the world and joined Accenture in 2015.

She believes creating a culture of equality and psychological safety is crucial to empowering people to perform their best. “I am passionate about inclusion—because it is about visible and invisible differences, and thus concerns everybody.”

“I wanted to extend a helping hand to people living in countries that need more guidance when it comes to LGBTI issues. As a senior leader at Accenture, it’s vital to be a role model to support the change,” says Christine Rauh.

Christine lives in Switzerland with her wife and is a firm believer in living authentically, which allows all people to leverage their full potential. It’s powerful to be a visible, “out” leader. She shares, “It’s so important because it outlines the DNA of the company where all kinds of people are welcome and that everybody can be who they are. And it also shows to others that you can have a successful career at Accenture while being out.”

“Leadership means to inspire, motivate and be a visible role model. Being recognized as a leader is not impacted by your role in the company,” says Mariangela Fierro.

Every day, Mariangela strives to be the leader she envisions. Born and raised in southern Italy, Mariangela moved first to Rome and then to Milan for work. She currently lives with her girlfriend and their cat, Pulce.

Although her coming out was relatively smooth, she recognizes that’s not the case with most of her colleagues. Mariangela works actively towards building an inclusive workplace where everyone is free to be themselves. “We need to share our stories, and promote the visibility of the LGBTI community,” she says.

“Many in the lesbian community carry immense guilt, as some are made to feel like a disappointment by loved ones,” says Annith. “Creating safe spaces to share our stories is extremely helpful. While I applaud Accenture’s ever-growing ally program of 116,000 members, allies need to understand that they are not supporting ‘us’, rather they are helping to change the mindset that groups people as ‘us’ and ‘them’.

“Identifying as LGBTI is not a choice, it’s just being,” says Luana. “We do not fight to be treated differently; we want to be heard and respected as everyone else. Some of us are feminine, some of us aren’t, and some of us are both. It doesn’t change anything. Celebrating Lesbian Day of Visibility calls the world’s attention to our existence.”

“Accenture is doing a brilliant job of building a culture of equality. As we get there, we need to keep up the momentum—let’s continue the training and awareness programs, employee resource groups and much more. We also need more people to get involved. The more people supporting us, the faster we can reach our goals,” continues Luana.

Words to live by

Find your fit with Accenture.

How leaders can support LGBTQ+ inclusion

The rainbow flag of Pride continues to spread its colors, and as we celebrate the unity and determination of people across the world striving for equality, we must also remain laser-focused on the roa...