FTI Consulting`s BAME network was set up in 2016, to amplify the voices of its Black, Asian and Minority Ethnic employees in London and to support their career development.

FTI Consulting has made nurturing a culture of diversity, inclusion and belonging across the firm a priority. In particular, the firm is focused on listening to and supporting its Black, Asian and Minority Ethnic (BAME) employees. Since 2016 the BAME network has grown significantly, going from meetings with just a handful of people to enough colleagues to fill a room to being inclusive across EMEA.

A safe and supportive space for its members

The BAME network is run by FTI Consulting volunteers. It helps to ensure that a culture of inclusion and belonging is consistently pursued and provides members with a safe space where they can voice their concerns, questions or ideas. The network also looks for ways to progress the BAME agenda by organising meetings, events, guest speaker series, training sessions and other internal initiatives proposed by its members. For example, the network hosted a training session on how to approach difficult conversations around pay and progression.

Members of the BAME network actively support each other, from answering other members’ questions, to pooling knowledge within the network or flagging external events and training sessions that people might want to attend. If anyone needs a one-to-one conversation, they know that their network chairs and fellow members are more than willing to sit down and talk.

So, with no plans to take the foot off the accelerator, what has FTI Consulting and its BAME network achieved so far?

Mentoring has proven to be one of the best ways for FTI Consulting to support colleagues’ professional and personal development, and the firm has a mentoring programme specifically designed for Black, Asian and Minority Ethnic employees. As soon as you join FTI Consulting, you’ll be connected with your own mentor, who will help you on your journey at the firm.

The BAME network is responsible for taking its members’ concerns and suggestions further on their behalf. A big part of this is ensuring that these are heard and acted on by FTI Consulting’s senior leadership, whom the network has established regular meetings and has open channels of communication – no matter how difficult or uncomfortable the conversation might be.

Training on microaggressions in the workplace

These difficult conversations extend beyond senior leadership. The BAME network is looking for different ways to engage with colleagues across EMEA and improve their understanding of important BAME issues. This includes training on microaggression in the workplace to increasing awareness of what microaggressions are and how to challenge them.

A series of events for Black British History month

FTI Consulting continues to place great importance on educating its workforce about racial justice and equality. In October 2020, its BAME network organised a series of events to mark Black British History month. These included a guest talk from David Olusoga, a prominent historian and broadcaster; an internal speaker series that allowed Black colleagues to talk about their experiences and what the firm and individuals could do better; and a quiz on Black British History.

The BAME network also put together a toolkit of resources that people could read, watch and listen to in order to further educate themselves, alongside a list of black-owned businesses to encourage people to support Black Pound Day, an initiative started by a former member of So Solid Crew.

Developing FTI Consulting’s culture of diversity, inclusion and belonging relies on creating opportunities for BAME employees to come together, as well as inviting colleagues to get involved and learn more about different cultures. The BAME network organises a number of heritage celebrations each year and collaborated with the colleagues in FTI Consulting’s Mumbai office to celebrate Diwali.  For Ramadan, the network explained its significance and ways to be a better ally in the workplace. This year, for the first time, the BAME network collaborated with Jewish colleagues during Passover, organising a virtual lunchtime session to exchange recommended viewing and reading on the topic of anti-slavery.

In addition to region-wide social events, the BAME network hosted its first holiday party in 2019 to celebrate members’ different cultures – from a playlist of songs by BAME artists to an international buffet featuring samosas, baklavas and more. The network also collaborated with FTI Consulting’s LGBT+ network to host film screenings, including Moonlight and A Dog Barking at the Moon. 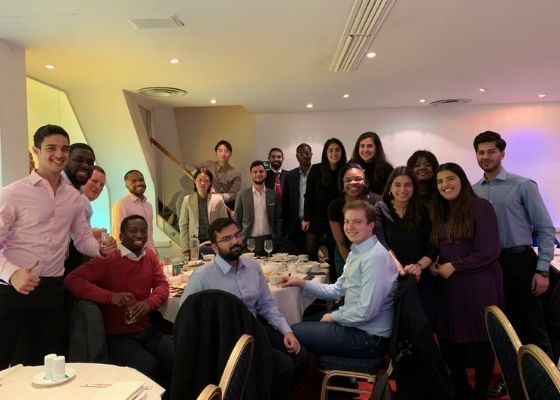