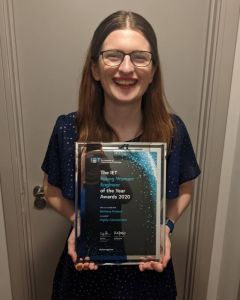 nspired by space and science at a young age, Beth followed her passion with a Physics with Astrophysics degree, continually inspired by watching women like Christina Koch launch to the International Space Station. Her focus then shifted from wanting to go to space to helping others get there. In her day-to-day role, Beth works in the High Integrity Software Expertise Centre, having joined Altran UK (now Capgemini Engineering UK) as an apprentice in software engineering in 2019.

Recently promoted to Consultant Engineer, Beth earnt a distinction in her BCS apprenticeship, was recognised earlier this year as a finalist in the IET’s Young Woman Engineer of the Year, and continues to lead local Scout groups and sit on the Scout National Council. Beth co-chairs Capgemini Engineering UK’s women’s network, and was also appointed to the WISE Young Professionals Board in 2020 where she advocates for, engages with and inspires current and future women in STEM.

“I stand on the shoulders of all the women who came before me, from Ada Lovelace, recognised as the world’s first computer programmer, right the way through to my female colleagues at work. I think we all have a responsibility to give back to the communities that have supported us so that they continue to support the next generation.”

Laura's Story: Capgemini Invent helped me make an impact and give back

Laura Butler an Associate Consultant in Business Technology tells us about her experience of joining Capgemini Invent, and the opportunities that she’s had to make an impact over her tim...

Natalie Davies   Tell us about your role. What does a day in your life at Capgemini look like? In my role as an architect, I’m responsible for shaping technology solutions for clients. This can invol...

Nive Bhagat   Tell us about your role. What does a day in your life at Capgemini look like? Well, I’ve been with Capgemini for a little over ten and a half years now and my role at Cloud Infrastruc...

Leadership roles for women in the tech sector come with challenges, however, they can be overcome by employing a bold mindset “Feminism isn’t about making women strong. Women are already strong....