BEIS Shaking off the Glitter – Reflections from Pride Season

“As Pride season draws to a close across the country, we can reflect on all of the events that our staff have attended up and down the country. The week of Pride in London, the LGBT+ Network were joined by the Secretary of State to raise the pride flag outside 1 Victoria Street.

Kim Humberstone shared: “This year I marched with the MOD contingent and given that it was one of the hottest Pride’s on record, I am not sure that my choice of a thick woollen suit was the best choice for the day, but it is always fun to march with polished boots and buttons, with shining medals. The reception from the crowd this year was fantastic as we marched to the sound of the Royal Navy band playing YMCA. However, my stand-out experience has to be one of my RAF colleagues doing the #RainbowFloss in front of the crowds. They went wild!” 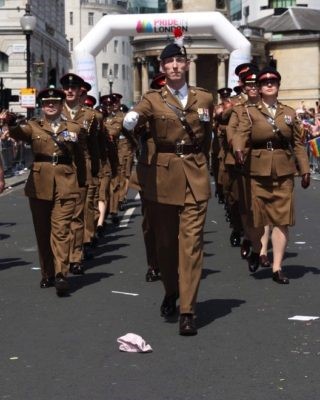 Another colleague went to Pride in a purely spectator capacity – however, half way through the parade her and her friend jumped the barrier and joined the Diva Magazine cohort and marched with them for the rest of the day! She shared: “Pride was brilliant – not only providing a safe space for individuals to express themselves, but also to learn about a range of diversities within the LGBT+ community – including the Bi+ Bus, The Puppies, LGBTQI Muslim Support and The Over 50s Lesbian and Gay Group.”

There was, however, a less positive side to the Pride in London parade this year. A group of anti-trans protesters stood in front of the parade to say that trans women cannot be lesbians. Due to the hot weather, and the organisers’ desire to get the march moving, they were allowed to lead the parade ahead of Sadiq Khan.

In direct response to the anti-trans group ‘hijacking’ London Pride, Brighton & Hove’s LGBT+ community responded by launching a social media campaign. The ‘#LwiththeT’ campaign, which quickly became a trending topic on Twitter, saw cisgender (denoting or relating to a person whose sense of personal identity and gender corresponds with their sex assigned at birth) female lesbians sharing videos and tweets of support for trans women and trans inclusion. Positive messages stating: ‘Trans women do not erase me’ and ‘Keep the L with the T’ quickly filled social media.

Following Brighton’s Trans Pride and the many other Pride events taking part across the country, the message continues to be embraced, scrawled across banners and t-shirts and retweeted.

Behind the ‘LwiththeT’ campaign there is a message of solidarity and a clear voice of support for the trans community. Many trans people have responded thankful and encouraged by this outpouring of support, especially at a time when there has been increased media backlash surrounding the reforms to the GRA (Gender Recognition Act 2004).

We often underestimate the positive impact a small gesture of support or an inclusive message can have. Taking a quick glance at the results from the LGBT+ survey run by GEO can give a shocking insight into the lives of many LGBT+ people in the UK.

Did you know that more than 2/3rds of LGBT+ people who responded do not hold hands with a same-sex partner on the street for fear of negative reactions? Or that 53% of trans respondents had experienced verbal harassment in the past year, in the most part, from strangers.

Bearing these facts in mind, it is important that we continue to create environments with inclusivity at their heart and speak up when seeing any inappropriate or non-inclusive behaviour.

At work, we each have a responsibility to ensure that being inclusive is an inherent part of our behaviours and our approach to colleagues. You can start small, for example; a rainbow/diversity network lanyard, making sure team events are suitable for all colleagues or ensuring everyone has an opportunity to talk at meetings. These are just small and simple gestures but send out a positive message of inclusion which can be all the more important when the wider world seems far from that.”

Written by Rebecca Cooper, a member of BEIS LGBTQ+ Network.