Barclays: Football is a sport for everyone

On 9 March 2022, the day after International Women’s Day, more than 90,000 girls took to pitches across the country for the FA and Barclays’ Biggest Ever Football Session – an event promoting equal access to the sport. Barclays Football Ambassador Kelly Smith MBE shares why attending the day was so important to her, and why she’s passionate about supporting young players. 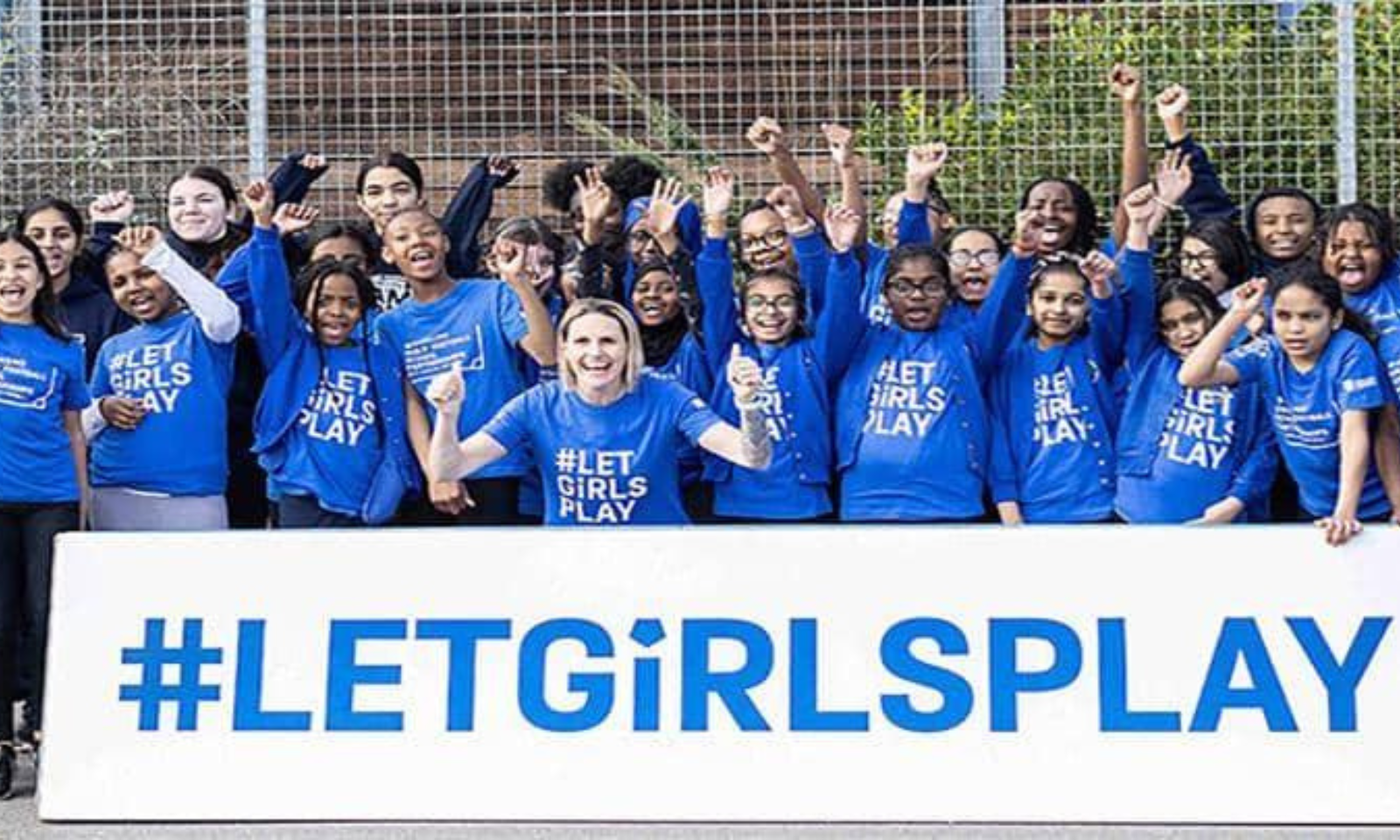 On a blustery day in London, the atmosphere at a primary school near Wembley Stadium is one of excitement. Bursts of sunlight illuminate the football pitch, where girls send footballs flying and high-five over goals scored through plastic cones – apparently unaffected by the brisk spring weather.

It’s the inaugural ‘Biggest Ever Football Session’ hosted by the FA and Barclays – and these are just a few of the students taking part at 1,450 schools across the UK.

With the stadium’s arch visible in the distance, the players gather for a group photo. “Let girls play!” they cheer as the camera snaps. This is the motivation behind the event, inspired by the FA and Barclays’ goal to unlock equal access to girls’ football by 2024.

The mission is close to the heart of a special guest attending the session, UK football legend Kelly Smith, MBE.

I faced a lot of adversity early on and I didn't give up. If I can be a role model for these young girls and if I can inspire someone – that's what gets me out of bed every day. Kelly Smith MBE Barclays Football Ambassador

“This is where you start”

“Being here today makes my heart really happy,” says Smith, whose 20-year career on the pitch saw her score 46 goals for England – a record she held until the end of last year. “It’s just great to see so many young girls having fun, interacting with each other and playing with smiles on their faces.”

The retired striker, now a Barclays Football Ambassador, looks out over the pitch in clear admiration. Among the young players is 11-year-old Jayla-Rae Palmer, who says she “fell in love” with football the first time she played more than three years ago.

“I didn’t see a lot of girl footballers at our school, and I wondered why,” Jayla-Rae recalls, speaking over the energetic whoops of the other players. “So I tried it. Now I play every day – at break, lunch and at home. I like to play defender and goalie, because it’s nice to be able to save a ball. I used to be scared, but I have more confidence now.”

She marvels over being able to see Smith play, and is enthusiastic about the value of the Biggest Ever Football Session. “We get to see that there will be more opportunities in the future – and that people actually do care about girls playing.”

Smith hopes she will inspire girls – and says her advice is to “dream really big”.

The sentiment is echoed by Asiyah Salloo, 11, and Liviah Boccuto, 10. “It’s showing that girls are capable of doing anything we want,” says Asiyah. Liviah agrees: “If the boys can do it, we can do it.”

A growing focus on the need for gender equality in football is largely thanks to players like Smith, who helped to blaze the trail for other women. As a young girl, opportunities for Smith to play the sport with other girls were almost non-existent. “I had to fight to play with the boys,” she recalls.

She was determined to keep playing despite the obstacles she faced. “I loved the ball at my feet. I lived and breathed the game,” she says. “I dreamed of being a professional footballer, but my dream really wasn't a vision. There was no visibility – no women's football on TV or in the papers. Nothing. All I saw was men's football, so I had no female role models growing up.

“Now, these young girls can turn on the TV and see footballers like Ellen White, Steph Houghton, Jill Scott and think, ‘You know what, I want to be a professional footballer – how do I do that?’ This is where you start.”

I didn’t see a lot of girl footballers at our school, and I wondered why. So I tried it. Now I play every day – at break, lunch and at home.

As part of its partnership with the Football Association, Barclays aims for 20,000 schools to offer football to girls by 2024.

While much has changed since the start of Smith’s career, there is still plenty of work to be done. Currently, less than half of schools offer extracurricular football to girls – and only 63% offer girls’ football through physical education lessons.

“It’s 2022,” says Jayla-Rae. “Everyone should be able to play without being scared of what people will say.”

With a record-breaking investment, the bank has committed to making a change. The recognition of major brands like Barclays has played an important role in making sure that women’s football is part of the conversation, says Smith. “It’s brilliant to have them on board. They have seen the value of women’s football, and to have their name associated with it just brings more attention and more media to the game. It’s about making girls’ football the norm – showing that it’s a sport for everyone, not just boys.”

While she was “fortunate” to be accepted on boys’ teams growing up, she’s conscious that the same might not be true for all girls who want to play today.

More than 90,000 students, including Asiyah Salloo, Jayla-Rae Palmer and Liviah Boccuto, took part in the event.

“I want to play,” says Liviah, “but sometimes the boys only pick some people and say, ‘You’re not good, you should do something else’ – instead of letting us play how we want.”

Smith adds that “sessions like this give girls a safe environment to express themselves, to learn and to enjoy the game that I love – our nation’s sport. Hopefully they will get that same feeling that I did many years ago.”

As a Barclays Football Ambassador, she is passionate about promoting equal access to football by speaking at events like this one. “I faced a lot of adversity early on and I didn't give up,” she explains. “If I can be a role model for these young girls and if I can inspire someone – that's what gets me out of bed every day.”

Smith’s advice? “It's all about your drive and ambition. Believe in yourself, and dream really big. If you apply yourself on a daily basis and work hard, you can achieve anything. That’s what I did in my life, and I want these girls to know that.”

The impact she’s had is clearly felt among the girls at the event. “She shows us resilience,” says Asiyah.

Today, seven years after her retirement, Smith spends time playing in a football league with “the dads from school”. “I’m the only girl again,” she laughs.

But with girls like Jayla-Rae, Asiyah and Liviah walking away from the Biggest Ever Football Session inspired by her story, the future of women’s football is bright.

Find out more about working at Barclays

Barclays' Nazreen Visram writing to her younger self

Writing to her childhood self as part of our letter series, Barclays’ Nazreen Visram looks back at growing up in 1970s and 1980s Luton, UK, being inspired by the bravery of her mother and learn...

Barclay's Head of Culture and Transformation shares letter to younger self

Hello, you! Being older has its good and bad sides. You see your parents age, then leave you with precious memories. Then you’ll get older yourself and understand what it’s like not having th...

Since joining Barclays as an apprentice at 16 years old, Bhavika Mistry has combined her career with taking a degree and her passion for table tennis. Here, she shares her experience of playing the...

As Barclays’ new Global Head of Race at Work, Azura Mason is leading work to attract and support Black colleagues across all levels of the bank. She shares why a rigorous approach to diversity and inc...