Paternity leave: 'All of my dad friends were incredibly jealous' 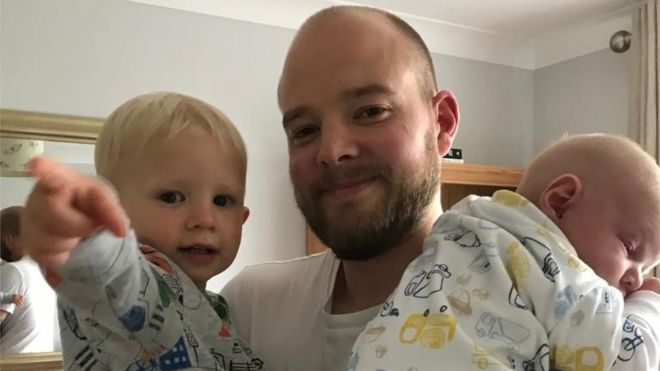 It's the dream of many dads: being able to spend more time with their children. For many people, work commitments make it difficult to have as much time as they would like with their growing kids. And right from the start, pressure on families is not helped if it's only possible to take a short paternity leave. But what would it be like if firms let dads take six months paid paternity leave?

In 2017, Aviva, which at the time was the UK's largest insurer, started to let all new parents have the same amount of paid leave. Piers Fenwick, who works for Aviva in Norwich as an analyst on its fraud team, recently took six months off around the birth of his youngest son, William.

"It was just a really great opportunity to help my wife, bond with my new son, and spend time with my eldest,"

"I think my wife quite liked having me around. Fingers crossed," he says.

Piers is 31, and is married to Kylie Fenwick, 30. They have two children: Matthew, who is two, and William, six months.

"Overall, it was fantastic, and all of my dad friends were incredibly jealous," he says.

"A lot of them work for companies that just do the statutory two weeks, and they would have to take unpaid or shared parental leave [to get the same amount of time off]."

'Part of the family'

Piers is one of hundreds of employees at Aviva who have taken advantage of the perk. In the UK, 496 Aviva employees used the policy in the first 10.5 months - 268 female, and 228 male workers. Piers says that being able to take the chunk of paid paternity leave didn't exactly bind him to the firm, but had made him want to give back.

"It really does motivate you in thinking this company cares. It makes you feel part of the family."

He adds that "it would really take something very special to be a more attractive proposition" in terms of moving to a different employer.

"I really don't know what it would take to tempt me away."

Not ready to deal with a baby on my own

We have offered Equal Parental Leave to our people since 2017. Here Becky and Kelly tell their story and the impact it has had on their lives since baby Ruby arrived. Becky, Kelly and baby Ruby Havi...

Happy Pride Season! We’re looking forward to celebrating with our people and the LGBTQ+ community throughout the summer. But why’s this important to us? Creating a diverse, inclusive orga...

Have you got the UK’s best “shoffice”? Enter our competition

If you’ve transformed a simple shed or outbuilding into a functional and fabulous home office — aka shoffice — let us know and you could win £250. We’re on a mission...