How your business can make a difference to LGBT inclusion 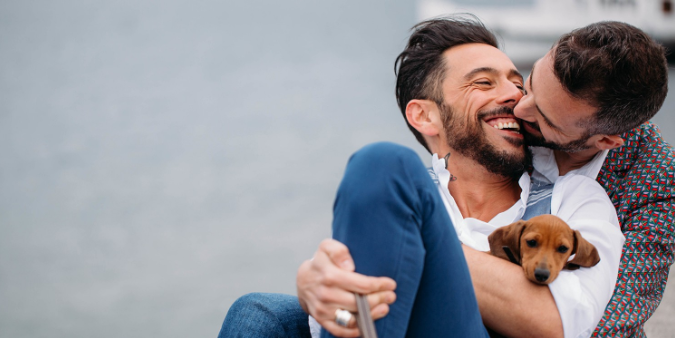 An estimated 1.1 million people in the UK identify as lesbian, gay or bisexual.[1] That’s 2% of the population — increasing from 1.5% in 2012.[2] As LGBT identities are increasingly recognised, accepted and celebrated, it’s important to make sure that your business is keeping up. Here’s our straightforward guide to welcoming LGBT employees and clients to your business.

The LGBT community is vibrant and diverse, including people of all ages and cultures. LGBT stands for lesbian, gay, bisexual and transgender, but the term also includes people across a broad spectrum of sexual orientation and gender identity. Some people and organisations use longer initialisms to reflect this, such as LGBTIQA, or LGBT+.

Why your business should care

Thinking about the way your business works with the LGBT community comes with a whole host of benefits.

Reaching the ‘pink pound’. The spending power of the LGBT community is estimated to be £6 billion per annum in the UK.[3]

Improving your business’ reputation. Showing clear support of a diverse community signals that everyone can benefit from your services.

Increasing productivity and morale. More than a third of LGBT staff have hidden their identity at work for fear of discrimination.[4] Making your whole team feel welcomed and supported can boost productivity.

Benefiting from diverse viewpoints and skills. The more diverse your team, the more ideas, skills and points of view.

Respecting the law. LGBT discrimination — even if it’s unintentional — is illegal.

Over the past fifty years, UK laws have made huge progress for the LGBT community. Same-sex marriages are legal and same-sex couples have equal rights when applying for adoption. Violence or hostility directed at someone because of their sexual orientation or transgender identity are recognised by the police as hate incidents.

Despite all the progress that has been made, the LGBT community still experience discrimination, harassment and abuse. At least 2 in 5 respondents to the government’s National LGBT Survey had recently experienced a hate incident such as verbal harassment or physical violence.[6]

In recent years, there have been several high-profile cases involving LGBT consumers who have been refused services by businesses. In 2013, the Christian owners of a B&B in Cornwall who turned away a gay couple lost their fight in the Supreme Court.[7] And a Northern Ireland bakery that refused to make a cake with the slogan ‘Support Gay Marriage’ are still fighting their legal battle.[8]

Example: Rose goes out for a drink with her friend Lorna. The pub landlord refuses to serve them because he thinks they are a same-sex couple.

Indirect discrimination — A business has a policy that applies to everyone but puts people with a protected characteristic at a disadvantage. However, this may be lawful if it is necessary for the running of the business.

Example: Tim’s company organises a conference in Saudi Arabia, a country where homosexuality is punishable by death. Tim cannot attend because he identifies as gay.

Harassment — Someone is treated offensively in the workplace because of a protected characteristic.

Example: Afia’s colleagues make jokes about her being bisexual, which her manager does not challenge. When she says it makes her uncomfortable, they say it’s just ‘banter’.

Victimisation — Someone is treated unfairly in the workplace because they have made or supported a discrimination complaint.

Example: One of Priya’s colleagues was dismissed after coming out as transgender. Priya gives evidence to support their complaint of discrimination on the basis of gender reassignment. As a result, Priya is dismissed as well.

4 steps for improving LGBT inclusion in your business

Here are a few ideas for making your business more LGBT friendly.

Avoid language that makes assumptions about someone’s identity. For example, instead of “Do you have a boyfriend?” you could ask “Do you have a partner?”

Listen to how your colleagues and clients describe their identities and reflect the language they use.

Train your frontline staff to use polite and inclusive language with all clients.

Recognise and avoid any language that is considered outdated or offensive.

Educate your managers and employees about your duties under the Equality Act 2010.

Develop a workplace anti-discrimination policy, and have it on display to signal your commitment.

Encourage your team to report incidents of LGBT discrimination. Tackle any reports seriously and promptly.

Support your local community. Sponsor LGBT events, such as your city’s pride parade, or a local LGBT charity.

Keep track of your progress. Anonymous diversity forms can help you track staff diversity within your business.

Ask for advice. Speak to LGBT employees and clients on how you can make your business more welcoming.

Consider working with LGBT organisations like Stonewall to drive inclusivity in your business.

Understand that you might make mistakes. Improving inclusivity is a journey — and you’ll learn a lot along the way.

How does your business welcome LGBT clients and employees? Share your advice in the comments below.

3 Pursuing the pink pound: How big is the UK’s LGBT market? Crunch https://www.crunch.co.uk/knowledge/marketing/pursuing-the-pink-pound-how-big-is-the-uks-lgbt-market/

We always strive to create a culture where everyone can be themselves. And what better way to celebrate the rich diversity of cultures at Aviva, than by cooking and eating?! Our colleagues have put to...

Today we’ve joined up with seven of the world’s leading insurers to found the UN-convened Net-Zero Insurance Alliance.We commit to playing our part in accelerating the transition to a global zero-emis...