Aon breaking down the Gender-Bread Person

Gender is one of those things everyone thinks they understand, but most people don’t.  Like Inception. Gender isn’t binary.  It’s not either/or.  In many cases it’s both/and. A bit of this, a dash of that. This tasty little guide is meant to be an appetizer for understanding. It’s okay if you’re hungry for more. 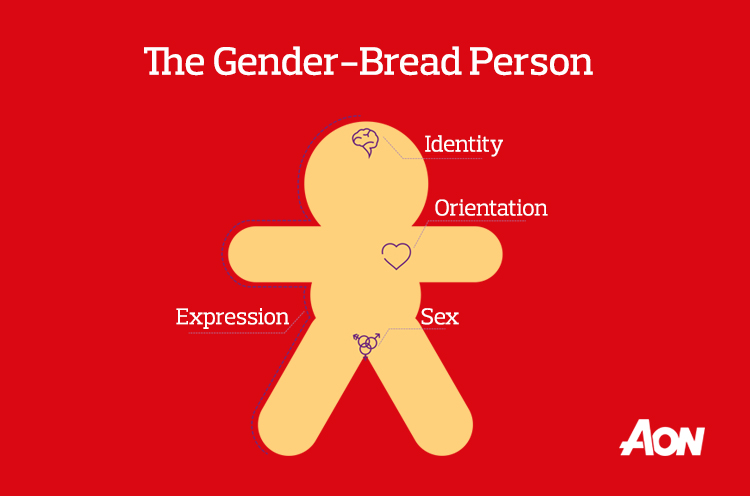 What is the ‘Gender-Bread Person’?

The Gender-Bread Person, along with the four indicators shown below, can be used to explain the different ways trans* people identify – also known as the trans* spectrum. Why is this important? It is estimated that approximately 5% of people in the UK experience a significant degree of gender variance and therefore fall into the trans* category. This figure has increased over the past 10 years and continues to grow as a result of society becoming more inclusive, leading to more trans* individuals being open as opposed to being closeted trans*.

What’s happening with trans* in Aon?

Aon wants to create an environment in which everyone is free to be themselves at work – regardless of their gender, ethnicity, sexual orientation – or where they might identify on the trans* spectrum.

Gender identity is how you, in your head, think about yourself.  It’s the chemistry that composes you (eg, hormone levels) and how you interpret what that means.

Gender expression is how you demonstrate your gender (based on traditional gender roles) through the ways you act, dress, behave and interact.

Sexual orientation is about who you are physically, spiritually and emotionally attracted to, based on their sex/gender in relation to your own.

Bringing your authentic self to work: LGBTQ+ inclusivity at Aon

Laura Jenkins talks about the positive, supportive environment that has been created at Aon and how it has helped her career progression. I joined Aon more than five years ago as a Director and O...

Celebrating a personal decade of diversity and inclusion at Aon

In his 10 years at Aon, Josh Rowland has always found diversity and inclusion for everyone embedded in the company’s culture. I joined Aon straight out of college on an apprenticeship programme....

Empowering Dyslexic Thinking in the workplace

Patrick Groneman I have worked as a digital designer at Aon since May 2021. Here, I use my creative skills to produce content, mostly for the commercial sales team it could be something for a sal...