This year we celebrate the amazing work achieved by women in engineering, past and present. 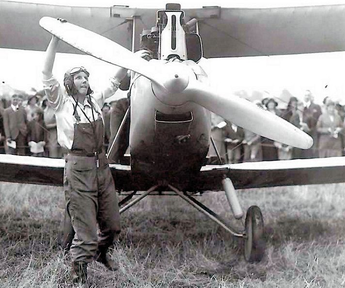 Dorothy Spicer (1908–1946), an English aviatrix, was the first woman to gain an advanced qualification inaeronautical engineering. After qualifying as a ground engineer with an 'A' (private) pilot's licence, Dorothy joined the Women’s Engineering Society in 1932 within their Aeronautical section. To progress her engineering career, at a time where institutions offering advanced courses were restricted to men, Dorothy persuaded the manufacturers of the aircraft she flew to allow her to undertake the necessary practical and theoretical training at their workshops and earned her 'B' licence, becoming the first woman in the world to do so and later became the first woman to achieve a 'D' licence in 1935.

Almost a century on, the perception and inclusivity within aeronautical engineering is changing and has progressed. Our Planning Manager, Maciej Tyc tells us why he believes it's important for the aviation industry to support the recruitment of women within engineering.

"Recruitment of women in Engineering should be key for every level of a business structure, bringing diversity to an environment which is predominantly perceived as 'male dominated'.

Nowadays, with wide access to professional forums such as LinkedIn, information about the engineering profession is much more accessible, with more visibility of apprenticeship schemes and engineering university courses. I hope that this will increase numbers of women in engineering going forward. Personally, I believe there is already a visible trend upwards compared to what we had seen let us say 10 years ago.

Particularly during these hard times, relationships built with different departments across the company is key to success, which I believe would not have been achievved without without support from a diverse Team."

Now more than ever, there is a significant demand to provide engaging educational experiences to the next generation.  To support women in engineering and further reduce the gender perception within the industry, we aim to highlight the roles and experiences of our staff and hope to raise the profile of Aeronautical Engineering to inspire females to pursue a career in the industry.

Carolyne's story: Her journey towards nurturing inclusive leadership through a gender balance lens at AirTanker